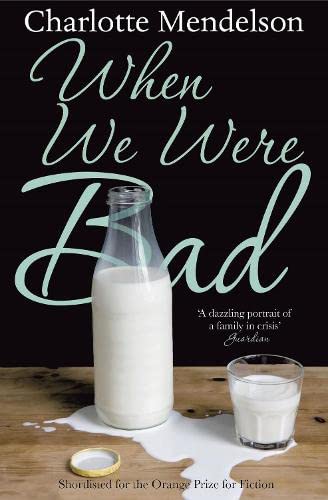 When We Were Bad
by Charlotte Mendelson

In Stock
£3.99
The dazzling Orange Prize shortlisted novel of a family in crisis
Very Good Good
7 in stock

When We Were Bad Summary

When We Were Bad: A Novel by Charlotte Mendelson

'The Rubin family, everybody agrees, seems doomed to happiness'

Claudia Rubin is in her heyday. Wife, mother, rabbi and sometime moral voice of the nation, everyone wants to be with her at her older son's glorious February wedding. Until Leo becomes a bolter and the heyday of the Rubin family begins to unravel . . .

`As intelligent as it is funny. A beautifully observed literary comedy as well as a painfully accurate description of one big old family mess' Observer

`Intelligent and witty. The Rubin family may be a singular one but the delights and the difficulties its members have with sex and spirituality, food and domesticity, expectation and achievement, will have a universal appeal' Sunday Telegraph

`Funny and emotionally true, this is a comedy with the warmest of hearts and the most deliciously subversive of agendas' Book of the Month, Marie Claire

When We Were Bad is a warm, poignant and true portrayal of a London family in crisis, in love, in denial and - ultimately - in luck..

When We Were Bad Reviews

"[Mendelson] is a keen observer ... she deftly blends humor and pathos in this portrayal of a family in crisis."

When We Were Bad, was shortlisted for the Orange Prize for Fiction, and was chosen as a book of the year in the Observer, Guardian, Sunday Times, New Statesman and Spectator. Charlotte Mendelson is also the author of Love in Idleness and Daughters of Jerusalem, which won both the Somerset Maugham Award and the John Llewellyn Rhys Prize. Almost English, her fourth novel, was longlisted for the Booker Prize.

GOR000289577
When We Were Bad: A Novel by Charlotte Mendelson
Charlotte Mendelson
Used - Very Good
Paperback
Pan Macmillan
2008-03-01
368
0330449303
9780330449304
Short-listed for Orange Broadband Prize for Fiction 2008 (UK)
Book picture is for illustrative purposes only, actual binding, cover or edition may vary.
This is a used book - there is no escaping the fact it has been read by someone else and it will show signs of wear and previous use. Overall we expect it to be in very good condition, but if you are not entirely satisfied please get in touch with us.