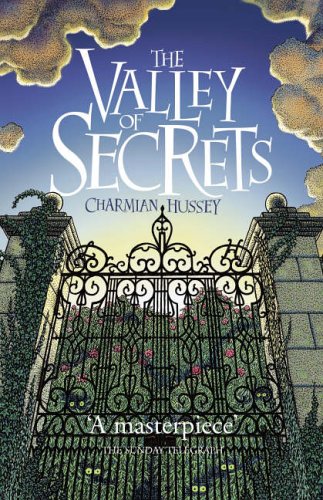 Valley of Secrets
by Charmian Hussey

In Stock
£2.99
A unique and unforgettable tale, beautifully decorated with Christopher Crump's highly detailed pen and ink drawings, sweeping from London to Cornwall to the Amazonian rainforest
Very Good Good
5 in stock

Valley of Secrets by Charmian Hussey

Abandoned as a baby, Stephen had nearly given up hope of ever finding his family. This epic adventure follows his change in fortunes as he receives an unexpected letter from a strange source and sets off on an unforgettable journey. From a drab room in London, where the rain comfirms the greyness of his life, Stephen travels to a Cornish Valley; remote, exquisitely beautiful and heavy with secrets.

A perfectly paced tale ... full of intrigue * Waterstone's Books Quarterly *
A book to educate as well as entertain * The Northern Echo *
An original and magical book, something special that will stay with you long after you have finished reading ... one of the most captivating novels that you are ever likely to read ... Unforgettable. Here we have a masterpiece that is a privilege to read * Sunday Morning Post *
The Valley of Secrets is an immaculate mystery story, but it is also a masterpiece of the imagination that tackles issues that we should all be thinking about * South China Morning Post *
A must for readers of all ages who wish to be swept along on a tide of imagination mingled with mystery * North Devon Journal *
One of those rare stories which can be enjoyed by both children and adults * Newbury Weekly News *
Beguiling ... This well-researched, beautifully illustrated book glistens with original and delightful details. * Time Out *
There's much to like about The Valley of Secrets ... Christopher Crump's truly stunning pen and ink illustrations add to the old-fashioned air ... I get a real sense that, buried deep in these pages, is a true children's classic ... this book has that indefinable something * The Guardian *
Breathtaking . . . from the the beauty of Cornwall to the depths of the Amazon basin bringing many surprises along the way. * Family Interest Magazine *
Totally absorbing. I loved it. * the Sunday Telegraph *
Conjures up the hidden magic of nature . . . As well as movingly exploring loneliness, foreignness and friendship, the novel is a paean to the powers of storytelling . . . This well-researched, beautifully illustrated book glistens with original and delightful details. * Time Out, London *

Charmian Hussey began her career modelling clothes for top couture and fashion houses in London. Later she trained as an archaeologist, originally studing at the University of London, Institute of Archaeology and working on excavations in Great Britain and the Middle East. On her return from two years work and research in Turkey she imported an ancient breed of Turkish dogs - now known in the United Kingdom as Anatolian Karabash

GOR002664470
Valley of Secrets by Charmian Hussey
Charmian Hussey
Used - Very Good
Paperback
Hachette Children's Group
2005-07-14
464
034089377X
9780340893777
N/A
Book picture is for illustrative purposes only, actual binding, cover or edition may vary.
This is a used book - there is no escaping the fact it has been read by someone else and it will show signs of wear and previous use. Overall we expect it to be in very good condition, but if you are not entirely satisfied please get in touch with us.