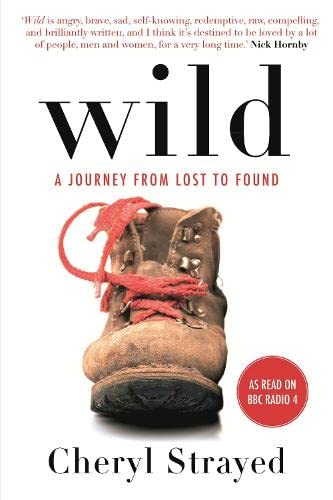 Out of Stock
'One of the best books I've read in the last five or ten years... Wild is angry, brave, sad, self-knowing, redemptive, raw, compelling, and brilliantly written, and I think it's destined to be loved by a lot of people, men and women, for a very long time.' Nick Hornby
Like New
Only 0 left

Wild: A Journey from Lost to Found by Cheryl Strayed

At twenty-six, Cheryl Strayed thought she had lost everything. In the wake of her mother's rapid death from cancer, her family disbanded and her marriage crumbled. With nothing to lose, she made the most impulsive decision of her life: to walk eleven-hundred miles of the west coast of America - from the Mojave Desert, through California and Oregon, and into Washington state - and to do it alone. She had no experience of long-distance hiking and the journey was nothing more than a line on a map. But it held a promise - a promise of piecing together a life that lay in ruins at her feet.

Strayed's account captures the agonies - both mental and physical - of her incredible journey; how it maddened and terrified her, and how, ultimately, it healed her. Wild is a brutal memoir of survival, grief and redemption: a searing portrayal of life at its lowest ebb and at its highest tide.

Clear, honest, and quietly riveting * Marie Claire *
A spectacular book... Both a literary and a human triumph * New York Times *
A deeply honest memoir about mother and daughter, solitude and courage, and regaining footing, one step at a time * Vogue *
Strayed's language is so vivid, sharp and compelling that you feel the heat of the desert, the frigid ice of the High Sierra and the breathtaking power of one remarkable woman finding her way - and herself - one brave step at a time. * People *

Cheryl Strayed is the author of the critically acclaimed novel Torch, the huge New York Times-bestselling memoir Wild and the collection of essays Tiny Beautiful Things: Advice on Love and Life from Someone Who's Been There. Her work has appeared in numerous magazines and journals, including The New York Times Magazine, The Washington Post Magazine, Allure and The Rumpus. She lives in Portland, Oregon.

GOR008478644
Wild: A Journey from Lost to Found by Cheryl Strayed
Cheryl Strayed
Used - Like New
Paperback
Atlantic Books
2012-07-05
336
0857897756
9780857897756
N/A
Book picture is for illustrative purposes only, actual binding, cover or edition may vary.
The book has been read, but looks new. The book cover has no visible wear, and the dust jacket is included if applicable. No missing or damaged pages, no tears, possible very minimal creasing, no underlining or highlighting of text, and no writing in the margins.