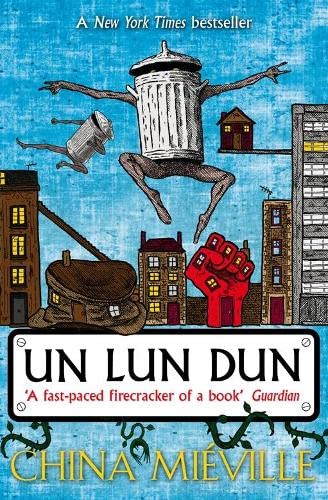 `UnLondon is at war. We're under attack. And it's been written, for centuries, that you - you - will come and save us.'

Stumbling through a secret entrance, Zanna and Deeba emerge in the strange wonderland of UnLondon. Here all the lost and broken things of London end up, and some of its people, too - including Brokkenbroll, boss of the broken umbrellas and Hemi the half-ghost boy. UnLondon is a place where Routemaster buses have legs, where Librarians are `bookaneers', intrepid adventurers dedicated to hunting down lost books, and postmen spend years tracking the mobile addresses of the ever changing Puzzleborough. But the girls have arrived at a dangerous time - UnLondon is under siege by the sinister Smog; it's a city awaiting its hero.

China makes extraordinary use of the ordinary is this wildly inventive fantasy adventure.

"Mieville's compelling heroine and her fantastical journey through the labyrinth of a strange London forms that rare book that feels instantly like a classic and yet is thoroughly modern." -- Holly Black, bestselling author of the YA novels TITHE and VALIANT "A book which shows the world as it truly is: full of marvels and monsters and unexpected opportunities for heroism and magic. UN LUN DUN is delicious, twisty, ferocious fun, a book so crammed with inventions, delights, and unexpected turns that you will want to start reading it over again as soon as you've reached the end."-- Kelly Link, author of STRANGER THINGS HAPPEN and MAGIC FOR BEGINNERS "From the Hardcover edition."

GOR001208131
Un Lun Dun by China Mieville
China Mieville
Used - Very Good
Paperback
Pan Macmillan
2008-02-01
528
0330450395
9780330450393
Winner of Locus Award Best Young Adult Book 2008 (UK)
Book picture is for illustrative purposes only, actual binding, cover or edition may vary.
This is a used book - there is no escaping the fact it has been read by someone else and it will show signs of wear and previous use. Overall we expect it to be in very good condition, but if you are not entirely satisfied please get in touch with us.