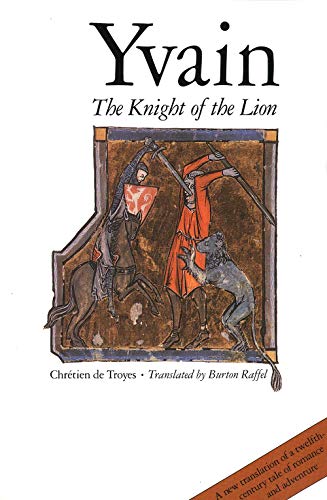 In Stock
£14.99
A twelfth-century poem by the creator of the Arthurian romance describes the courageous exploits and triumphs of a brave lord who tries to win back his deserted wife's love.
Good
Only 1 left

Yvain: The Knight of the Lion by Chretien, de Troyes

The twelfth-century French poet Chretien de Troyes is a major figure in European literature. His courtly romances fathered the Arthurian tradition and influenced countless other poets in England as well as on the continent. Yet because of the difficulty of capturing his swift-moving style in translation, English-speaking audiences are largely unfamiliar with the pleasures of reading his poems.
Now, for the first time, an experienced translator of medieval verse who is himself a poet provides a translation of Chretien's major poem, Yvain, in verse that fully and satisfyingly captures the movement, the sense, and the spirit of the Old French original. Yvain is a courtly romance with a moral tenor; it is ironic and sometimes bawdy; the poetry is crisp and vivid. In addition, the psychological and the socio-historical perceptions of the poem are of profound literary and historical importance, for it evokes the emotions and the values of a flourishing, vibrant medieval past.

"A masterpiece on the conflict between romantic love and knightly duty. . . . An excellent introduction to the poet and to his aesthetic and moral sensibilities."-Library Journal

"The translation reads with remarkable fluidity in English and succeeds better than any other I know in evoking the rapid rhythms, the changing moods, and lively colloquialness of the original. For all its poetic merits, R.'s translation remains remarkably faithful to Chretien's text. . . . R.'s poetic rendition, reasonably priced, beautifully reproduced, and delightful to read, should awaken a great many modern readers to the marvels of Chretien's world."-William W. Kibler, Romance Philology
"The mystery and excitement of early French romance are epitomized in Yvain. In this fine translation the rendering of the speech-like quality of Old French verse provides an accurate sense of the original, while the rhythmic variation continually pulls one's attention toward the narrative itself in all its enigmatic charm."-Stephen G. Nichols
"To enable us to share in the pleasure of Yvain, we now have the lively and colloquial rendering of Burton Raffel. It is an effective intermediary between Chre'tien and us, one that is faithful to the tenor of the romance but embodied in unaffected contemporary English, free of all traces of stiltedness and archaicism."-Joseph J. Duggan, from the Afterword

Burton Raffel, professor of English at the University of Denver, is the translator of numerous works, including Poems from the Old English, Beowulf, and Sir Gawain and the Green Knight.