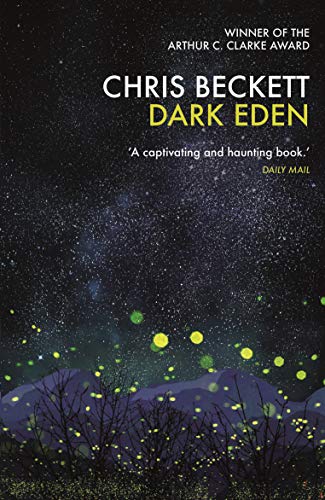 A marooned outpost of humanity struggles to survive on a startlingly alien world: science fiction as it ought to be from the winner of the Arthur C. Clarke award, 2013

You live in Eden. You are a member of the Family, one of 532 descendants of Angela and Tommy. You shelter beneath the Forest's lantern trees. Beyond the forest lie mountains so forbidding that no one has ever crossed them. The Oldest recount legends of a time when men and women made boats that could travel between worlds. One day, they will come back for you.

You live in Eden. You are a member of the Family, one of 532 descendants of two marooned explorers. You huddle, slowly starving, in the warmth of geothermal trees, confined to one barely habitable valley of an alien, sunless world.

Dark Eden is an incredible novel

Chris Beckett is a university lecturer living in Cambridge. He has written over 20 short stories, many of them originally published in Interzone and Asimov's. He is the winner of the Edge Hill Short Story competition, 2009, for The Turing Test, as well as the prestigious Arthur C. Clarke award, 2013, for Dark Eden.

GOR004337303
Dark Eden by Chris Beckett
Chris Beckett
Used - Very Good
Paperback
Atlantic Books
2012-08-01
416
1848874642
9781848874640
Winner of Arthur C Clarke Award 2013 (Australia)
Book picture is for illustrative purposes only, actual binding, cover or edition may vary.
This is a used book - there is no escaping the fact it has been read by someone else and it will show signs of wear and previous use. Overall we expect it to be in very good condition, but if you are not entirely satisfied please get in touch with us.