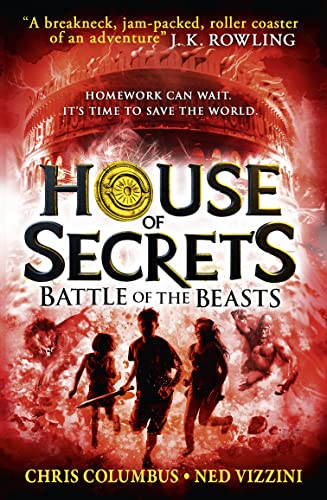 Battle of the Beasts
by Chris Columbus

Book two in the bestselling HOUSE OF SECRETS series. Get ready for another action-packed adventure!

Battle of the Beasts Summary

Battle of the Beasts (House of Secrets, Book 2) by Chris Columbus

Book two in the bestselling HOUSE OF SECRETS series. Get ready for another action-packed adventure!

Just when the Walker kids thought they were safe, the Wind Witch blasts Kristoff House into a crazy world of battles, beasts and cyborgs. From the searing heat and clashing swords of the Colosseum, to the snow-capped Tibetan mountains and some seriously freaky monks - the stakes have never been higher!

Can the Walkers save the world? Again? Brendan, Cordelia and Nell better be prepared to fight for their lives...

The second book in the major new House of Secrets series. IT'S GOING TO BE EPIC!

Battle of the Beasts Reviews

PRAISE FOR HOUSE OF SECRETS

"an engrossing page-turner." - The Guardian

"House of Secrets...serves up everything an eight to twelve year old reader could possibly want from an adventure." - Love Reading 4 Kids

For over twenty-five years, Chris Columbus has written, directed and produced some of the most successful box-office hits, which have established him as a major force in contemporary Hollywood film-making. As a writer, he launched his career with the legendary films Gremlins and The Goonies. Columbus directed and produced the first two films in the blockbuster Harry Potter series and produced the third. More recently, Columbus has directed features such as the hit film Percy Jackson & the Olympians: The Lightning Thief. As a
director, Columbus has been at the helm of such films as Home Alone and Mrs. Doubtfire.

Ned Vizzini (1981-2013) began writing for the New York Press at the age of fifteen. At seventeen, he was asked to write a piece for the New York Times Magazine, and at nineteen, he published Teen Angst? Naaah..., his autobiography of his years at Stuyvesant High School. His debut teen novel, Be More Chill, was selected for the Today Show Book Club by Judy Blume. It's Kind of a Funny Story, a cult classic, was adapted into a 2010 film starring Zach Galifianakis and named one of the 100 Best-Ever Teen Novels by National Public Radio. The Other Normals, his third novel, was a Junior Library Guild selection. He was the co-author, with Chris Columbus, of the New York Times bestselling fantasy-adventure series House of Secrets. He wrote for the New Yorker and Salon. He also wrote for television, including MTV's hit show Teen Wolf. His work has been translated into twenty-five languages

GOR008562322
Battle of the Beasts (House of Secrets, Book 2) by Chris Columbus
Chris Columbus
House of Secrets
Used - Like New
Paperback
HarperCollins Publishers
2015-02-26
512
0007490178
9780007490172
N/A
Book picture is for illustrative purposes only, actual binding, cover or edition may vary.
The book has been read, but looks new. The book cover has no visible wear, and the dust jacket is included if applicable. No missing or damaged pages, no tears, possible very minimal creasing, no underlining or highlighting of text, and no writing in the margins.