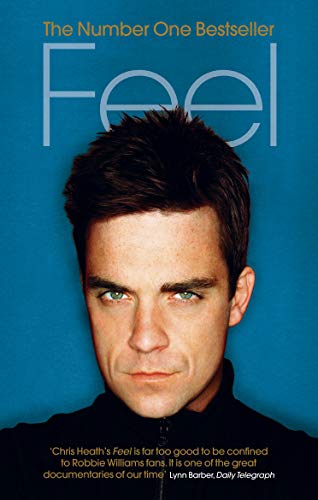 In Stock
£4.49
The publication of Feel: Robbie Williams by Chris Heath in September 2004 caused shockwaves of controversy and delight. Written by Chris Heath, who spent nearly two years working with Robbie on this book, every word is imbued with Robbie's humour, charisma, talent, memories and complexity.
Very Good Good
Only 3 left

The publication of Feel: Robbie Williams by Chris Heath in September 2004 caused shockwaves of controversy and delight. Not only was its publication trumpeted in tabloids, on TV and the radio, but it was also critically lauded by the broadsheets. Finally, a book had been written on the subject of celebrity and the modern world which had intelligence, honesty and humour. Written by Chris Heath, who spent nearly two years working with Robbie on this book, every word is imbued with Robbie's humour, charisma, talent, memories and complexity. But more than ever before, this book tells the truth about his extraordinary life. You may have seen his face a million times, heard his music every day, followed him from the beginning of Take That, but this is a man with some serious surprises in store. After years of rumour and lies, the complete, intimate story of Robert P. Williams had been written. This is a groundbreaking book.

"The definitive book on Robbie Williams" * Heat *
"A phenomenal piece of journalism... an absorbing essay on fame and the music industry" * Observer *
"Perceptive, sympathetic and sometimes shocking. It is also - because Williams is a genuinely amusing man - wonderfully funny" * Sunday Telegraph *
"The most lustrous and scrupulously observed anatomy of the madness of top-flight 21st century celebrity existence that it has ever been my deep joy to read" * Independent on Sunday *
"It's all there, the inside story that the fans have guessed at and the tabloids have done their best to invent...Until Mrs Williams finally does appear, nobody is going to get closer to Robbie than this" * Sunday Times *

Chris, also an investigative news-writer, has written for Rolling Stone, Details, the Telegraph and The Sunday Times amongst many others. His subjects have varied from Madonna and Lisa-Marie Presley to politicians, murderers and artists. Chris and Robbie have spent nearly two years working on this book.

GOR000511828
Feel: Robbie Williams by Chris Heath
Chris Heath
Used - Very Good
Paperback
Ebury Publishing
2005-01-31
544
0091897548
9780091897543
N/A
Book picture is for illustrative purposes only, actual binding, cover or edition may vary.
This is a used book - there is no escaping the fact it has been read by someone else and it will show signs of wear and previous use. Overall we expect it to be in very good condition, but if you are not entirely satisfied please get in touch with us.