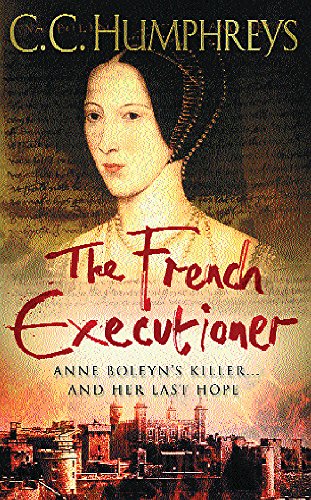 The French Executioner
by Chris Humphreys

The French Executioner by Chris Humphreys

Irresistible adventure story based on the real-life figure of Jean Rombaud, who beheaded Anne Boleyn.

It is 1536, and the expert swordsman, Jean Rombaud, has been brought over from France by Henry VIII to behead his wife, Anne Boleyn.

But on the eve of her execution Rombaud swears a vow to the ill-fated queen - to bury her six-fingered hand, symbol of her rumoured witchery, at a sacred crossroads. Yet in a Europe ravaged by religious war, the hand of this infamous Protestant icon is so powerful a relic that many will kill for it...

From a battle between slave galleys to a black mass in a dungeon, through the hallucinations of St Anthony's Fire to the fortress of an apocalyptic Messiah, Jean seeks to honour his vow.

Thrilling, funny, well researched and, at times, painfully poignant * INDEPENDENT ON SUNDAY *
If you can find a first impression, hoard it and wait till it rises in value like a first edition of LORD OF THE RINGS. This is as good * CRIME TIME *
To my mind Cornwell is good... but Humphreys is better! * HISTORICAL NOVELS REVIEW *
This unusual tale conjures visions of an Errol Flynn-type Hollywood swashbuckler...the tale's well-told, engagingly written, and includes a colourful immersion into a time when life was cheap and danger or death literally waited around every corner. A gory but fascinating...look at the world in the early 16th century * KIRKUS *
Set against the backdrop of the Protestant Reformation, his superbloody Princess Bride-like adventure is, at its heart, a tale of redemption, well earned and hard-won * LIBRARY JOURNAL *
Humphreys' [Jack Absolute] breathes life into 16th century Europe with this fascinating tale of adventure and mystery...Humphreys' characters are well drawn and deeply empathetic, and Rombaud's mission remains entertaining throughout * PUBLISHERS WEEKLY *
Falling somewhere between the novels of Bernard Cornwell and Wilbur Smith, C. C. Humphreys has fashioned a rollicking good yarn that keeps the pages turning from start to finish * IRISH EXAMINER *
Don't miss this wonderful saga of magic and heroism ... stirring and delightful ... constantly exciting ... For sheer pleasure I've read nothing to match it all year * CRIME TIME *

C.C. Humphreys was born in Toronto and grew up in Los Angeles and London. A third generation actor and writer on both sides of his family, he is married and lives on Salt Spring Island, Canada. www.cchumphreys.com

GOR001276030
The French Executioner by Chris Humphreys
Chris Humphreys
Used - Very Good
Paperback
Orion Publishing Co
2002-10-03
464
0752848305
9780752848303
Short-listed for CWA Ian Fleming Steel Dagger 2002
Book picture is for illustrative purposes only, actual binding, cover or edition may vary.
This is a used book - there is no escaping the fact it has been read by someone else and it will show signs of wear and previous use. Overall we expect it to be in very good condition, but if you are not entirely satisfied please get in touch with us.