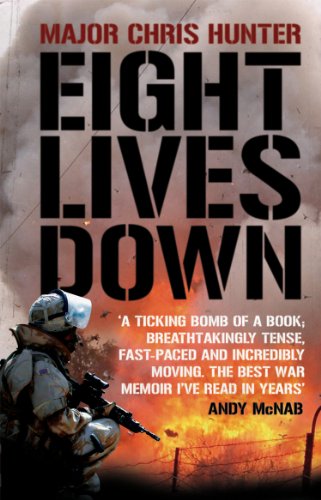 Eight Lives Down
by Chris Hunter

In Stock
£4.49
SEARING HEATYou have the most dangerous job in the world's most dangerous place. You are responsible for bomb disposal in the British sector of Iraq.You are the last defence against oblivion. , COLD FEARYou are up against some of the most sophisticated bombmakers in the world. This could be your last moment on earth.
Very Good
6 in stock

Eight Lives Down by Chris Hunter

SEARING HEAT You have the most dangerous job in the world's most dangerous place. You are responsible for bomb disposal in the British sector of Iraq.You are the last defence against oblivion. And it's already a hundred degrees in the shade. , COLD FEAR You are up against some of the most sophisticated bombmakers in the world. They don't play by the rules of the Geneva Convention. Nothing but your own wits will save you. You're on your own. SILENCE Now is the moment of truth. All you can hear is the sound of your own blood pounding through your veins. This could be your last moment on earth. IT'S JUST YOU AND THE BOMB

"A ticking bomb of a book; breathtakingly tense, fast-paced and incredibly moving. The best war memoir I've read in years" -- Andy McNab
"You might expect an account of disabling bombs to be repetitive or overly technical, but Hunter's is neither. Each incident is fascinatingly different and edge-of-the-seat dramatic, and Hunter recounts them with vividness and clarity" * Daily Mail *
"Thoughtful, gripping and engaging... The emotion, the immediacy, the adrenalin rush of what it feels like to walk towards a device that may or may not blow at any minute taking you and everyone in the proximity with it packs an authentic punch" -- Kate Mosse * The Times *
"Chris Hunter is a very brave man. His work couldn't be more terrifying or necessary" * Daily Mirror *
"Action-packed... A breathtaking story of courage and survival" * News of the World *

Chris Hunter joined the British Army in 1989 at sixteen. He was commissioned from Sandhurst at twenty-one and later qualified as a counter-terrorist bomb disposal operator. He served with a number of specialist counter-terrorism units and during his career was deployed to numerous operational theatres, including the Balkans, Northern Ireland, Colombia, Afghanistan and Iraq. For his actions during his Iraq tour he was awarded the Queen's Gallantry Medal by HM Queen Elizabeth II.

GOR000687642
Eight Lives Down by Chris Hunter
Chris Hunter
Used - Very Good
Paperback
Transworld Publishers Ltd
2008-04-21
528
0552155713
9780552155717
N/A
Book picture is for illustrative purposes only, actual binding, cover or edition may vary.
This is a used book - there is no escaping the fact it has been read by someone else and it will show signs of wear and previous use. Overall we expect it to be in very good condition, but if you are not entirely satisfied please get in touch with us.