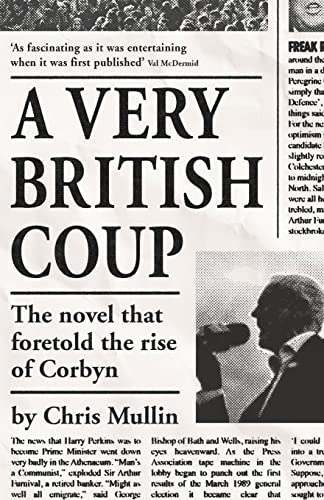 Used Price
£3.49
New RRP £8.99
Free Shipping in the UK
Former steel worker Harry Perkins has led the Labour Party to a stunning victory at the general election. His manifesto includes removal of American bases and public control of finance. The Establishment is appalled by the prospect. As M15 conspires with the city and the press barons, Perkins finds himself in a no-holds-barred battle for survival.
Reviews:
Trustpilot
Very Good Good

A Very British Coup: The novel that foretold the rise of Corbyn by Chris Mullin

Against the odds, former steel worker Harry Perkins has led the Labour party to a stunning victory. Now he's going to dismantle Britain's nuclear warheads, bring finance under public control and dismantle the media empires. But the establishment isn't going down without a fight. As MI5 conspires with the city and press barons to bring Perkins down, he finds himself caught up in a no-holds-barred battle for survival. Described as 'the political novel of the decade' when it was first published, A Very British Coup is as fresh and relevant now as it ever has been.

As fascinating as it was entertaining when it was first published ... it's disturbing how much still resonates. If Corbyn seeks a cautionary tale, he need look no further. -- Val McDermid * New Statesman *
Rattles along with speed and great credibility * The Times *
A delicious fantasy... crisply written and the story belts along * Observer *
A world of power struggle in Downing Street, Fleet Street, Whitehall and Washington * New Statesman *
A spiffing read... calculated to grip blue-rinsed Conservative ladies and make Socialist eyes pop * People *
Chris Mullin's book is the first for some time that I have stayed awake to finish -- Ken Livingstone * Labour Herald *
A curious Molotov cocktail * Financial Times *
Entertaining propaganda * Literary Review *
A very effective political thriller, which hasyou on the edge of your seat from start to finish * Oxford Mail *
Entertaining to anyone interested in contemporary politics * Glasgow Herald *
...a brilliant concept that opened the way for my own novels -- Michael Dobbs
Compulsive reading * City Limits *

Chris Mullin was Member of Parliament for Sunderland South from 1987 until 2010. Before being elected as an MP, he worked as a journalist on the ITV documentary programme World in Action and had been editor of Tribune. His trilogy of political diaries, beginning with A View from the Foothills, are also published by Profile Books, as was his memoir Hinterland. A Very British Coup was made into an award winning television series in 1988.

GOR001394989
A Very British Coup: The novel that foretold the rise of Corbyn by Chris Mullin
Chris Mullin
Used - Very Good
Paperback
Profile Books Ltd
2010-01-14
240
1846687403
9781846687402
N/A
Book picture is for illustrative purposes only, actual binding, cover or edition may vary.
This is a used book - there is no escaping the fact it has been read by someone else and it will show signs of wear and previous use. Overall we expect it to be in very good condition, but if you are not entirely satisfied please get in touch with us.