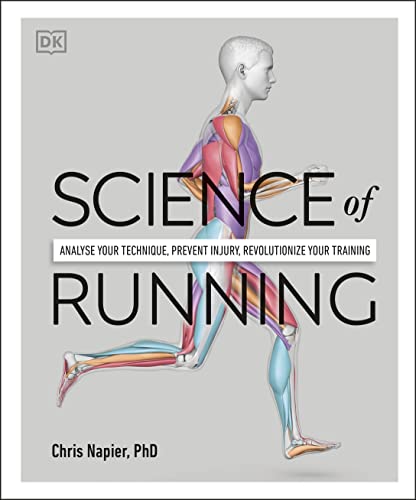 Science of Running by Chris Napier

Discover the hard science that will help you run faster, endure for longer, and avoid injury.

Analyse your running style and learn how to enhance your gait for optimum efficiency and safety.

Transform your performance with exercises targeting strength, flexibility, and recovery - each exercise annotated to reveal the muscle mechanics so you know you're getting it right.

Understand the science behind your body's energy systems and how to train to maximise energy storage and conversion.

Follow training and exercise programmes tailored to different abilities and distances, from 5K to marathon.

Whether you are new to running or an experienced racer, this book will help you achieve your goals and stay injury-free.

Chris Napier is a clinician, a researcher specialising in running injury prevention, and a keen runner. He is co-owner of Restore Physiotherapy, a private practice in Vancouver, Canada, and a Clinical Assistant Professor in the Department of Physical Therapy at the University of British Columbia (UBC). He is a physiotherapist with Athletics Canada, and has worked with Commonwealth, Pan Am, Olympic, and World Championship teams. As a runner, he earned a silver medal at the Canadian Junior Track & Field Championships in 1996 and a bronze medal at the Canadian University Track & Field Championships in 1997 in the middle distances. Having moved up to the marathon in 2010, he has enjoyed chipping away at his personal best over the years, with the help of his coach and co-author, Jerry Ziak.

Jerry Ziak has been a competitive distance runner since 1986, a coach since 2005, and co-owner of the running speciality store Forerunners North Shore, Vancouver, since 2013. His competitive running career began over cross country and on the track, where he specialized in middle distances ranging from 800m to 10,000m. He ran for Auburn University in Alabama, Boise State University in Idaho, and the University of Victoria in British Columbia before settling down at the University of British Columbia. He used this varied experience to self-coach himself over longer distances, ultimately achieving a time of 2:17:24 for the marathon. He also began to coach high school cross country and track as well as half marathon and marathon clinics. He continues to compete over a range of distances into his forties and enjoys sharing his knowledge and passion for the sport via his store, his running clinics, and online coaching.

GOR010237889
9780241394519
0241394511
Science of Running: Analyse your Technique, Prevent Injury, Revolutionize your Training by Chris Napier
Chris Napier
Used - Very Good
Paperback
Dorling Kindersley Ltd
2020-02-04
224
N/A
Book picture is for illustrative purposes only, actual binding, cover or edition may vary.
This is a used book - there is no escaping the fact it has been read by someone else and it will show signs of wear and previous use. Overall we expect it to be in very good condition, but if you are not entirely satisfied please get in touch with us
Trustpilot