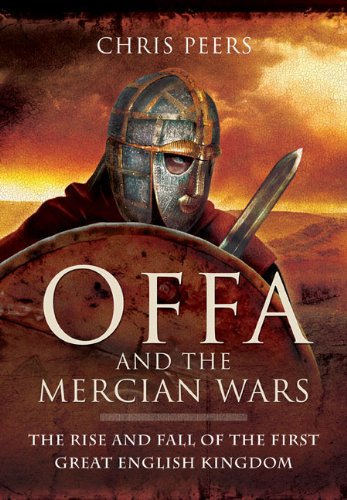 Offa and the Mercian Wars
by Chris Peers

Offa and the Mercian Wars Summary

Offa and the Mercian Wars by Chris Peers

In England in the eighth century, in the midst of the so-called Dark Ages, Offa ruled Mercia, one of the strongest Anglo-Saxon kingdoms. For over 30 years he was the dominant warlord in the territory south of the Humber and the driving force behind the expansion of Mercia's power. During that turbulent period he commanded Mercian armies in their struggle against the neighbouring kingdoms of Northumbria and Wessex and against the Welsh tribes.Yet the true story of Offa's long reign and of the rise and fall of Mercia are little known although this is one of the most intriguingepisodes in this little-recorded phase of England's past. It is Chris Peers's task in this new study to uncover the facts about Offa and the other Mercian kings and to set them in the context of English history before the coming of the Danes. He describes how the tribes of middle England were welded together by Penda, one of Offa's remarkable predecessors, and how Mercia developed into a cohesive militaristic society which defended itself and preyed on its neighbours. A line of strong kings - Wulfhere Aethelred and Aethelbald - followed and laid the foundations for the kingdom Offa took over in 757.Warfare came naturally to these men - they were born into a warrior tradition - and Chris Peers pays particular attention to this key element in Mercian society. Also, of course, he discusses the most famous monument that has come down to us from Offa's reign - the defensive dyke constructed in the west of England to deter the incursions of the Welsh.His fresh account of this neglected era in English history draws together the results of the latest archaeological research and the sparse documentary evidence that has survived. It makes fascinating reading.

Offa and the Mercian Wars Reviews

"an excellent look at life in Anglo-Saxon times, and at an overlooked but very important ruler"--The NYMAS Review
"This account of Offa of Mercia and his battles against the other kingdoms of ancient Britain is as thrilling as a Bernard Cornwell novel..."--Books Monthly
"Much of this period is unrecorded but the author effectively fills in the gaps through his extensive research. Often histories of England begin with the Norman Conquest, but this work effectively argues that England was truly created hundreds of years earlier."-- (05/01/2018)
"Peers often explains his conclusions, since the evidence is frequently uncertain, a practice which helps make this book more useful than some others. An excellent introduction to Britain in the so-called "Dark Ages"."--The NYMAS Review, Winter 2018

Chris Peers is a leading expert on the history of ancient and medieval warfare and has written widely on the subject. He has contributed many articles to military history, wargaming and family history magazines, and his major publications include Warlords of China: 700BC-AD1662, Warrior Peoples of East Africa, Soldiers of the Dragon, The African Wars: Warriors and Soldiers of the Colonial Campaigns, Offa and the Mercian Wars: The Rise and Fall of the First Great English Kingdom, and Genghis Khan and the Mongol War Machine.

GOR006163053
Offa and the Mercian Wars by Chris Peers
Chris Peers
Used - Very Good
Hardback
Pen & Sword Books Ltd
2012-05-17
256
1848844433
9781848844438
N/A
Book picture is for illustrative purposes only, actual binding, cover or edition may vary.
This is a used book - there is no escaping the fact it has been read by someone else and it will show signs of wear and previous use. Overall we expect it to be in very good condition, but if you are not entirely satisfied please get in touch with us.