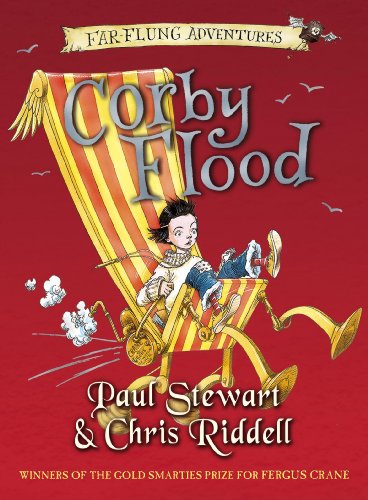 In Stock
£1.99
Corby Flood and her family are about to set sail on the rather ramshackle cruise ship, the S.S. As the ship arrives at its destination, Corby must enlist the help of some very well moustachioed locals to uncover the contents of the crate and the dark secrets of the menacing Clowns...
Very Good
9 in stock

Corby Flood and her family are about to set sail on the rather ramshackle cruise ship, the S.S. Euphonia. Her boisterous brothers might not have noticed that anything is wrong, but Corby is highly observant and has a lot of time for note-taking and eavesdropping. Onboard, amongst all the odd passengers and eccentric crew, there is a strange group of men in bowler-hats who call themselves The Brotherhood of Clowns. There's also a melancholy wailing sound coming from the hold. It's strictly out of bounds but Corby can't help investigating. What could be inside the crate she discovers down in the hold? As the ship arrives at its destination, Corby must enlist the help of some very well moustachioed locals to uncover the contents of the crate and the dark secrets of the menacing Clowns...

"The second sparky tale in the series, again embellished by the drawings of Chris Riddell, our latter day Heath Robinson . . . An eagerly awaited sequel" -- Christina Hardyment * Independent *
"Corby Flood is Stewart and Riddell's best book yet. Completely satisfying as an adventure, the new book is full of amusing characterisation and is endlessly playful and inventive" -- Michael Thorn * TES *
"Extremely funny and, of course, brilliantly illustrated by Chris Riddell" * The Children's Bookseller *
"It's difficult to comment when each book from these two, author and artist, sets a standard whereby the outstanding is normal for them!" * The School Librarian *

GOR001140415
Corby Flood by Chris Riddell
Chris Riddell
Far-Flung Adventures
Used - Very Good
Paperback
Random House Children's Publishers UK
2006-04-06
256
0440867266
9780440867265
N/A
Book picture is for illustrative purposes only, actual binding, cover or edition may vary.
This is a used book - there is no escaping the fact it has been read by someone else and it will show signs of wear and previous use. Overall we expect it to be in very good condition, but if you are not entirely satisfied please get in touch with us.