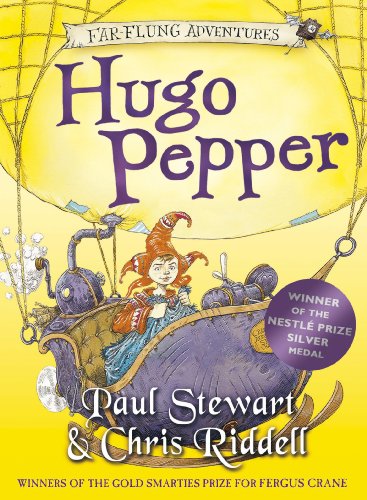 In Stock
£7.49
Raised in the Frozen North by reindeer herders, his parents eaten by polar bears when he was just a baby, Hugo discovers that the sled they arrived in has a very special compass - one that can be set to 'Home'.
Very Good Good
Only 4 left

A brilliantly inventive, fabulously illustrated addition to the Far-Flung Adventure series from the award-winning, bestselling author and illustrator team, Paul Stewart and Chris Riddell. Set in the same world as Fergus Crane and Corby Flood's stories, this is the tale of a small boy, Hugo Pepper, and his amazing exploits. Raised in the Frozen North by reindeer herders, his parents eaten by polar bears when he was just a baby, Hugo discovers that the sled they arrived in has a very special compass - one that can be set to 'Home'. And so Hugo arrives in Firefly Square - to discover a group of very special friends, and a dastardly enemy... With three-toed snowmen, a secret buried treasure and a host of fabulous stories, this is a fantastic new tale in this series.

"Paul Stewart and Chris Riddell share one of the most dynamic author-illustrator partnerships in children's literature today. The fruits of this truly collaborative process shimmer, shine and truly stand-out from the crowded book shelves in shops, libraries, schools and homes . . . The gentlemen are on fine flying form here, prompting the request, Please Sirs, we want some more . . ." * Achuka *
"Without a doubt this book will absolutely charm young readers who have a fondness for stories with lots of layers . . . Quirky, utterly delightful and captivating" -- Marya Jansen-Gruber * Through the Looking Glass *
"A wildly inventive tale" * The Children's Bookseller *

GOR001163607
Hugo Pepper by Chris Riddell
Chris Riddell
Far-Flung Adventures
Used - Very Good
Paperback
Random House Children's Publishers UK
2007-04-05
272
0440866960
9780440866961
N/A
Book picture is for illustrative purposes only, actual binding, cover or edition may vary.
This is a used book - there is no escaping the fact it has been read by someone else and it will show signs of wear and previous use. Overall we expect it to be in very good condition, but if you are not entirely satisfied please get in touch with us.