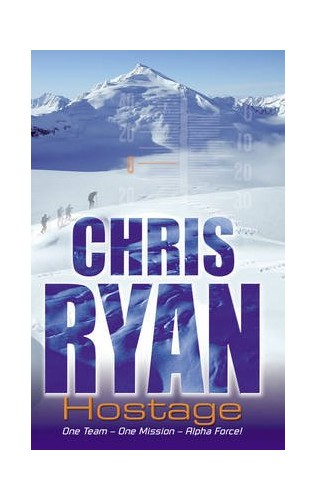 Flying to Northern Canada to investigate reports of illegal dumping of toxic waste, the Alpha Force team must dive into an icy river, cross the harsh landscape on snowmobiles and test their caving skills to complete their mission.

Flying to Northern Canada to investigate reports of illegal dumping of toxic waste, the Alpha Force team must dive into an icy river, cross the harsh landscape on snowmobiles and test their caving skills to complete their mission. But they need all their courage and determination when they come face-to-face with a man who is ready to kill - or take a hostage - to stop them.

Includes Chris Ryan's top SAS tips on Safety and Survival in and around water.

Great gung-ho stuff * Independent on Sunday *
Boys will definitely like this adventure * Teen Titles *
With Chris Ryan it's unremitting action where 'who dares wins' is always true, heroes and heroines are without blemish and villains without redeeming features . . . Many are going to love this -- Dennis Hamley * Carousel *

Chris Ryan was born in 1961 in a village near Newcastle. In 1984 he joined the SAS. During his ten years in the Regiment, he was involved in overt and covert operations and was also Sniper team commander of the anti-terrorist team. During the Gulf War, Chris was the only member of an eight-man team to escape from Iraq, of which three colleagues were killed and four captured. It was the longest escape and evasion in the history of the SAS. For this he was awarded the Military Medal. During Ryan's last two years in the Regiment he selected and trained potential SAS recruits, he left the SAS in 1994 and is now the author of many bestselling thrillers for adults, as well as the ALPHA FORCE series for younger readers. His work in security takes him around the world. He has also appeared in a number of TV programmes, including HUNTING CHRIS RYAN, PUSHED TO THE LIMIT (Toughest Families) and TERROR ALERT (Sky TV, 2004).

GOR010468189
Alpha Force: Hostage: Book 3 by Chris Ryan
Chris Ryan
Alpha Force
Used - Like New
Paperback
Random House Children's Publishers UK
2003-06-05
288
B007YTGOCI
9780099439271
N/A
Book picture is for illustrative purposes only, actual binding, cover or edition may vary.
The book has been read, but looks new. The book cover has no visible wear, and the dust jacket is included if applicable. No missing or damaged pages, no tears, possible very minimal creasing, no underlining or highlighting of text, and no writing in the margins.