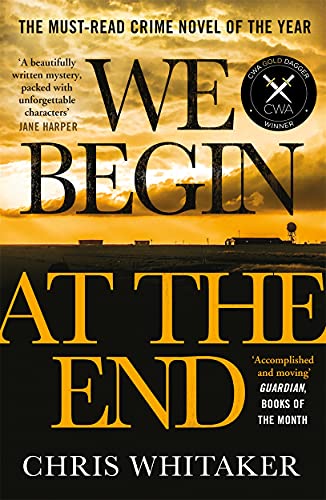 We Begin at the End
by Chris Whitaker

Used Price
£5.99
New RRP £8.99
Free Shipping in the UK
Like Star Radley, his ex-girlfriend, and sister of the girl he killed. Duchess Radley, Star's thirteen-year-old daughter, is part-carer, part-protector to her younger brother, Robin - and to her deeply troubled mother.
Like New Very Good

We Begin at the End Summary

We Begin at the End: 'A beautifully written mystery, packed with unforgettable characters' Jane Harper by Chris Whitaker

WATERSTONES THRILLER OF THE MONTH 'A beautifully written mystery, packed with unforgettable characters' JANE HARPER 'Contender for thriller of the year' SUNDAY EXPRESS 'An accomplished and moving story of crime, punishment, love and redemption' GUARDIAN For fans of Jane Harper's The Dry comes a powerful novel about the lengths we will go to keep our family safe. This is a story about good and evil and how life is lived somewhere in between. Thirty years ago, Vincent King became a killer. Now, he's been released from prison and is back in his hometown of Cape Haven, California. Not everyone is pleased to see him. Like Star Radley, his ex-girlfriend, and sister of the girl he killed. Duchess Radley, Star's thirteen-year-old daughter, is part-carer, part-protector to her younger brother, Robin - and to her deeply troubled mother. But in trying to protect Star, Duchess inadvertently sets off a chain of events that will have tragic consequences not only for her family, but also the whole town. Murder, revenge, retribution. How far can we run from the past, when the past seems doomed to repeat itself? WHAT PEOPLE ARE SAYING ABOUT WE BEGIN AT THE END: 'Magnificent . . . an instant classic, a West Coast Where the Crawdads Sing . . . a special, vital novel. I'm grateful to have read it' A J FINN 'Surely destined to conquer the world' RUTH JONES 'So beautifully written' LYNDA LA PLANTE 'A stunning and heartbreaking book - will keep you gripped until the last moving page' CLAIRE MCGOWAN 'An exceptionally beautiful and accomplished crime novel' ALI LAND 'One of the best books I've ever read' FIONA CUMMINS 'An absolute masterclass in crime writing and story-telling' JO SPAIN 'One of the year's best crime reads' VASEEM KHAN 'One of my favourite books of all time' M. W. CRAVEN, winner of the CWA's Gold Dagger Award 'Breathtakingly beautiful. Another stunning story from the genius of Chris Whitaker' COMPULSIVE READERS 'A spellbinding masterclass in storytelling . . . one of the best books I have ever had the joy to read' ALEX J BOOKS BLOG 'A masterpiece . . . a contender for my top book of 2020' FOR WINTER NIGHTS BLOG 'I was totally seduced by this absolute masterpiece . . . took my breath away' SUIDI'S BOOK REVIEWS 'This book is bound to become a classic . . . Reader, Chris Whitaker's book made me cry . . . such is the power of this writing' LIVE AND DEADLY BLOG 'Utterly brilliant . . . This isn't just crime fiction, this is a masterclass' MELANIE READS BLOG 'A masterpiece of storytelling with clever twists and an ending to knock you sideways' CANDIS MAGAZINE 'This heart-rending story . . . is among the most powerful and moving I have read in years' DAILY MAIL 'Cements Whitaker's status as one of the most talented authors writing today' HEAT MAGAZINE 'Masterly novel' SUNDAY EXPRESS 'A dark yet painfully human tale that is impossible to forget' CRIME MONTHLY 'Beautifully written and deeply moving' SUNDAY TIMES CRIME CLUB 'A gorgeous, crystalline novel' JEANINE CUMMINS, author of AMERICAN DIRT

We Begin at the End Reviews

Chris Whitaker is the award-winning author of Tall Oaks and All The Wicked Girls. Both books were published to widespread critical acclaim, with Tall Oaks going on to win the CWA John Creasey New Blood Dagger Award. Chris lives in Hertfordshire with his family. Follow Chris on Twitter @WhittyAuthor

GOR010689969
We Begin at the End: 'A beautifully written mystery, packed with unforgettable characters' Jane Harper by Chris Whitaker
Chris Whitaker
Used - Like New
Paperback
Zaffre
2020-08-06
464
1785769405
9781785769405
N/A
Book picture is for illustrative purposes only, actual binding, cover or edition may vary.
The book has been read, but looks new. The book cover has no visible wear, and the dust jacket is included if applicable. No missing or damaged pages, no tears, possible very minimal creasing, no underlining or highlighting of text, and no writing in the margins.