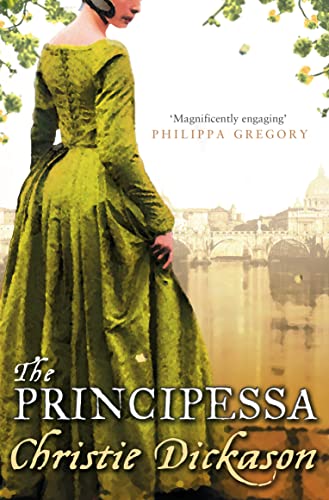 The Principessa
by Christie Dickason

Sumptuous, glorious evocation of Jacobean London and Renaissance Italy from the acclaimed author of The Firemaster's Mistress.

The Principessa by Christie Dickason

Sumptuous, glorious evocation of Jacobean London and Renaissance Italy from the acclaimed author of The Firemaster's Mistress.

Robert Cecil, Secretary of State to James I, has a problem. He owes a vast and secret debt to the Prince of La Spada, who is dying and has called in the loan - and Cecil cannot pay. Even worse, he has staked as security, without royal authority, the King's Great Pearl. To Cecil's surprise, the Prince will agree to a hostage but he wants Cecil's firemaster: Francis Quoynt, the best in his dangerous business. Cecil immediately seizes the chance, for Quoynt also serves as his spy.

La Spada is a wealthy, beautiful Italian city-state - the gateway of Europe. Whoever controls the mountain passes of La Spada also controls the flow of intelligence and much of the trade from the Middle East. As his mind disintegrates into fantastic obsessions, the Prince makes his treacherous illegitimate son his heir. Which thwarts the deadly ambition of his daughter, Sofia - the Principessa.

Sofia is young, seductive, wily and recently widowed. Already a blooded player of politics, she could outdo Lucretia Borgia in the lethal game of survival. Which she must now play to save herself and her beloved state. As unpredictable as gunpowder, will she choose to seek Francis's heart, or his life? Or both?

Praise for The Principessa
`The perfect companion for long autumn evenings. It's an absorbing historical adventure...a satisfyingly intricate plot' First

`This is a fabulous read. I recommend it to anyone who enjoys historical adventure and intrigue, twists and turns but also to those who revel in a poignant and powerful love story. There's something for everyone and what's more, it's beautifully written. What more could anyone ask? I cannot for the life of me understand why Christie Dickason's novels are not better known and appreciated. It's high time.' Historical Novels Review

Praise for The Firemaster's Mistress
`A rich mix of romance, suspense, adventure and lightly-worn knowledge. Gunpowder, treason and plot have never been so entertaining.' Kate Saunders, The Times

`Atmospheric and impressively researched, it is highly entertaining.' Elizabeth Buchan, The Sunday Times

`Marries conspiracy theory to Jacobean high-jinks...a racy read...reveals the principal actors to be models of conspirators everywhere: single-minded, ideologically driven, careless of their own and others lives, believers for the wrong reasons in the efficacy of a single violent blow to change the course of history ...so strangely does it resonate with our own times...sometimes one is momentarily unsure whether one is in 1605 or 2005 as one reads.' A.C. Grayling, Financial Times

Christie Dickason was born in America but also lived as a child in Thailand, Mexico and Switzerland. Harvard-educated, and a former theatre director and choreographer (with the Royal Shakespeare Company and at Ronnie Scott's among others), she lives in London with her family.

GOR000656639
The Principessa by Christie Dickason
Christie Dickason
Used - Very Good
Paperback
HarperCollins Publishers
2007-10-01
512
0007230397
9780007230396
N/A
Book picture is for illustrative purposes only, actual binding, cover or edition may vary.
This is a used book - there is no escaping the fact it has been read by someone else and it will show signs of wear and previous use. Overall we expect it to be in very good condition, but if you are not entirely satisfied please get in touch with us.