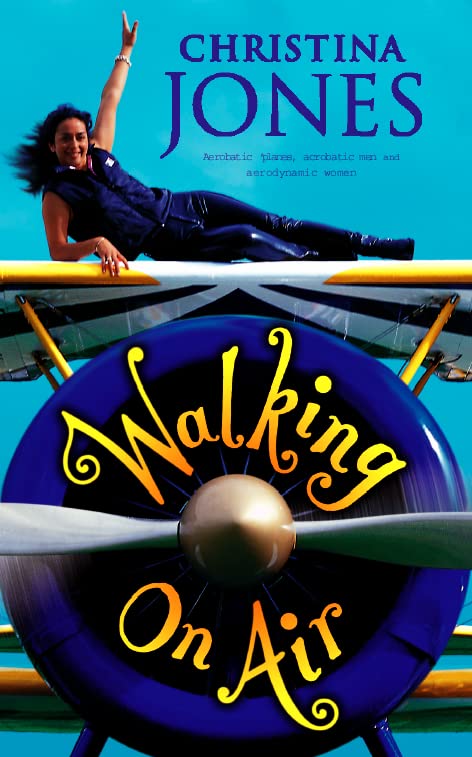 Walking on Air
by Christina Jones

An enchanting, exuberant novel, featuring a girl who hates flying adrift in the world of aeronautical acrobatics, by a favourite storyteller.

Walking on Air by Christina Jones

An enchanting, exuberant novel, featuring a girl who hates flying adrift in the world of aeronautical acrobatics, by a favourite storyteller.

Billie Pascoe, currently a taxi driver in a country town, takes an impulsive risk when she spends her grandmother's small legacy on a warehouse on the edge of a small airfield.

But her attempt at business enterprise and at a new image of professional efficiency is marred by her ex-boss's determination to keep her under control; her friends' and family's attempts to find her a suitable mate; and the mystery about her past, complicated by cover-ups.

Among the first items in her warehouse is an old `plane waiting to be restored. Billie hates flying, so it is even more surprising that she finds herself offering to perform acrobatic stunts and wing-walking...

Filled with a great cast of characters from her flatmate who runs the local beauty salon to the fellow owners of the neighbouring warehouses, from the unspeakably glamorous air engineer to her redoubtable, interfering mother, Walking on Air is Christina Jones's most exhilarating novel.

Christina Jones, brought up in a circus family, wrote short stories for some time before being encouraged to write her first novel, Going the Distance, which became a highly successful WHS Fresh Talent entry. She is married and lives outside Oxford. This is her fifth novel.

GOR000925366
Walking on Air by Christina Jones
Christina Jones
Used - Very Good
Paperback
HarperCollins Publishers
2000-05-02
592
0006513441
9780006513445
N/A
Book picture is for illustrative purposes only, actual binding, cover or edition may vary.
This is a used book - there is no escaping the fact it has been read by someone else and it will show signs of wear and previous use. Overall we expect it to be in very good condition, but if you are not entirely satisfied please get in touch with us.