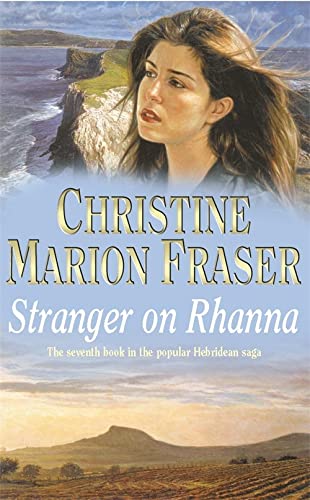 In Stock
£4.99
The seventh novel in the popular Hebridean saga
Very Good
5 in stock

Rachel Jodl returns to Rhanna and the security of home to escape from her hectic life as a concert violinist and from the pressures that have strained her marriage almost to breaking point. Here she meets Austrian Otto Klebb, a dark, striking man, also seeking refuge in Rhanna, whose charm and generous spirit quickly win him a special place in the hearts of all the islanders - especially Rachel's. Their love of music draw them to each other, but soon they come to share something much deeper. Only Rachel knows Otto's real reasons for coming to Rhanna - he has blood ties with the McKinnon clan to which she belongs. However, he is also the most renowned pianist in Europe. Jon looks at Rachel's growing fondness for Otto with jealous unease and when she announces she's pregnant, he refuses to believe the child is not Otto's. It takes a death and a revelation for Jon to return to his wife and child.

Full-blooded romance, a strong authentic setting * Scotsman *
Christine Marion Fraser writes characters so real they almost leap out of the page . . . you would swear she must have grown up with them * Sun *
Rhanna is a great discovery. It wouldn't surprise us if one of the Hebridean islands changed its name to cash in on its fame * Glasgow Citizen *

Christine Marion Fraser is one of Scotland's best-selling authors, outselling even Catherine Cookson, with world-wide readership and translations into many foreign languages. She is the author of the much-loved Rhanna series. Second youngest of a large family, she soon learned independence during childhood years spent in the post-war Govan district of Glasgow. Chris now lives in Argyll with her husband.

GOR001064615
Stranger on Rhanna by Christine Marion Fraser
Christine Marion Fraser
Used - Very Good
Paperback
Hodder & Stoughton General Division
2002-10-03
352
0340824093
9780340824092
N/A
Book picture is for illustrative purposes only, actual binding, cover or edition may vary.
This is a used book - there is no escaping the fact it has been read by someone else and it will show signs of wear and previous use. Overall we expect it to be in very good condition, but if you are not entirely satisfied please get in touch with us.