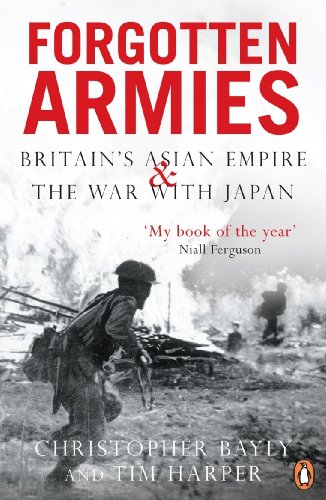 In Stock
£5.99
Effectively it is the story of the birth of modern South and South- East Asia and the hopes and fears of the dozens of armies' marching through the jungle battlefields.
Very Good Good
6 in stock

Forgotten Armies: Britain's Asian Empire and the War with Japan by Christopher Bayly

The vast crescent of British-ruled territories from India down to Singapore appeared in the early stages of the Second World War a massive asset in the war with Germany, providing huge quantities of soldiers and raw materials and key part of an impregnable global network denied to the Nazis. Within a few weeks in 1941-2 a Japanese invasion had destroyed all this, almost effortlessly taking the 'impregnable fortress' of Singapore with its 80,000 strong garrison, and sweeping through South and Southeast Asia to the frontier of India itself. This revolutionary, absolutely gripping book brings to life the entire experience of South and Southeast Asia in this extraordinary period, telling the story from an Indian, Burmese, Chinese or Malay perspective as much as from that of the British or Japanese. Effectively it is the story of the birth of modern South and Southeast Asia and the hopes and fears of the dozens of 'forgotten armies' marching through the jungle battlefields, so many dying for causes swept away by the reality that emerged in 1945. Even as the British successfully fought back in the bloodiest battles in South and Southeast Asia's history, there was no going back to colonial rule.

GOR001041479
Forgotten Armies: Britain's Asian Empire and the War with Japan by Christopher Bayly
Christopher Bayly
Used - Very Good
Paperback
Penguin Books Ltd
2005-08-04
592
0140293310
9780140293319
N/A
Book picture is for illustrative purposes only, actual binding, cover or edition may vary.
This is a used book - there is no escaping the fact it has been read by someone else and it will show signs of wear and previous use. Overall we expect it to be in very good condition, but if you are not entirely satisfied please get in touch with us.