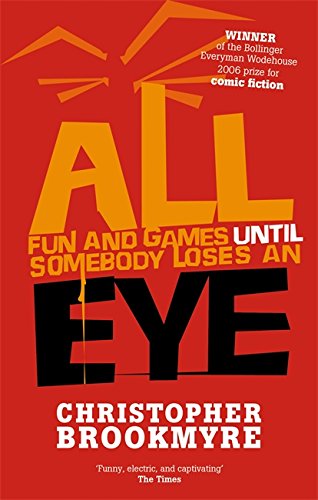 All Fun And Games Until Somebody Loses An Eye Summary

As a teenager Jane Bell had dreamt of playing in the casinos of Monte Carlo in the company of James Bond, but in her punk phase she'd got herself pregnant and by the time she reaches forty-six she's a grandmother, her dreams as dry as the dust her Dyson sucks up from her hall carpet every day. Then her son Ross, a researcher working for an arms manufacturer in Switzerland, is forced to disappear before some characters cut from the same cloth as Blofeld persuade him to part with the secrets of his research. But they are not the only ones desperate to locate him. A team of security experts is hired by Ross's firm: headed by the enigmatic Bett, his staff have little in common apart from total professionalism and a thorough disregard for the law. Bett believes the key to Ross's whereabouts is his mother, and in one respect he is right, but even he is taken aback by the verve underlying her determination to secure her son's safety as she learns the black arts of quiet subterfuge and violent attack. The teenage dreams of fast cars, high-tech firepower and extreme action had always promised to be fun and games, but in real life it's likely someone is going to lose an eye ...

All Fun And Games Until Somebody Loses An Eye Reviews

Chris Brookmyre was a journalist before becoming a full time novelist with the publication of QUITE UGLY ONE MORNING. Since the publication of A BIG BOY DID IT AND RAN AWAY he and his family decided to move away from Aberdeen and now live near Glasgow. Oh, yes.

GOR001022128
All Fun And Games Until Somebody Loses An Eye by Christopher Brookmyre
Christopher Brookmyre
Used - Very Good
Paperback
Little, Brown Book Group
2006-04-20
416
0349117454
9780349117454
Winner of Bollinger Everyman Wodehouse Prize for Comic Fiction 2006 (UK) Short-listed for Theakston's Old Peculier Crime Novel of the Year 2007 (UK)
Book picture is for illustrative purposes only, actual binding, cover or edition may vary.
This is a used book - there is no escaping the fact it has been read by someone else and it will show signs of wear and previous use. Overall we expect it to be in very good condition, but if you are not entirely satisfied please get in touch with us.