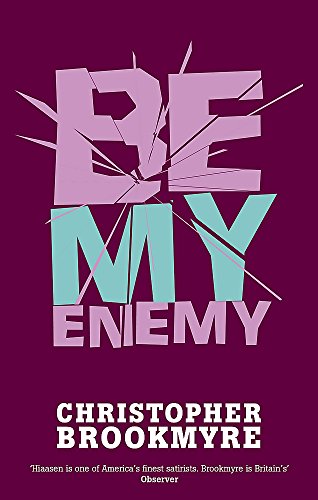 Be My Enemy
by Christopher Brookmyre

In Stock
£4.49
Ferociously unpredictable. Bitingly funny. Action-packed to perfection. BE MY ENEMY finds Christopher Brookmyre on top form - and you'll never look at a snooker table in the same way again.
Very Good
Only 2 left

Be My Enemy Summary

Be My Enemy by Christopher Brookmyre

The fourth book in the Jack Parlabane series, from author Christopher Brookmyre.

It was a junket, a freebie. A 'team-building' weekend in the highlands for lawyers, advertising execs, businessmen, even the head of a charity. Oh, and a journalist, specially solicited for his renowned and voluble scepticism - Jack Parlabane. Amid the flying paintballs and flowing Shiraz even the most cynical admit the organisers have pulled some surprises - stalkers in the forest, power cuts in the night, mass mobile phone thefts, disappearing staff, disappearing guests: there's nothing can bring out people's hidden strengths or break down inter-personal barriers quite like not having a clue what's going on and being scared out of your wits. However, when the only vehicular access for thirty miles is cut off it seems that events are being orchestrated not just for pleasure ... And that's before they find the first body. Thereafter, 'finding out who your colleagues really are' is not so much an end product as the key to reaching Monday morning alive.

Be My Enemy Reviews

'Ingenious satire.' HEAT 'This is a wickedly funny crime novel.' SUNDAY TIMES 'Satisyingly develops the rare combination of jokes and jolts of which Brookmyre is the finest exponent apart from the American writer Carl Hiaasen.' GUARDIAN 'His dialogue fizzes with energy and wit, and the often gruesome, black humour is unparalleled.' VENUE 'Brookmyre segues from comedy to thriller without missing a beat.' ARENA 'Leaves you breathless with excitement.' DAILY EXPRESS 'Pacy, funny and genuinely thrilling... It's the kind of thing Agatha Christie would have written if she'd been off her tits on manky crack.' TIME OUT 'Christopher Brookmyre is a mischievious satirist, and here he is at his best.' DAILY TELEGRAPH 'As a writer he's a one-man delivery system for witty one-liners, as well as being bitter, cynical, hard-bitten, and pragmatic to boot.' IRISH INDEPENDENT 'The most mischievous white-knuckle writer on the bookshelf' Daily Express 'Sharply satirical and poignantly funny, this is a gripping and highly entertaining read.' Time Out 'Chris Brookmyre is a genius.' Mirror 'Brookmyre has no equal.' Maxim 'Brookmyre is a brilliant satirist...an absolute must read' Punch 'Exhilarating linguistic fluency and keenly subversive intelligence' Scotland on Sunday 'By now, readers know what to expect from the remarkable Mr Brookmyre, and Be My Enemy has all the hallmarks of his caustic wit. The protagonist of his earlier books, the wry Jack Parlabane, makes a welcome reappearance, faced with an intriguing professional problem: he is to take part in a weekend of "corporate teambuilding" in the comfortable surroundings of a secluded estate. But quite what sort of course is this? Jack's instincts as a no-holds-barred hack, skilled at uncovering unpalatable truths, warn him that something unusual is in the offing--but he's not quite prepared for the extremely dangerous sideshow that is to accompany the corporate makeovers. This is wonderfully abrasive stuff, full of the scabrous insights that we read Brookmyre for, and it's good to see ideas shoehorned into the satirically biting prose; while never neglecting the crucial task of keeping us turning those pages, Brookmyre makes some sharp points here; one of them being that we all harbour certain fascist tendencies, stifling a desire to put paid to those who go against us. The Highland country house in Be My Enemy functions as a hot house in which certain ideas along these lines can be explored--and Brookmyre's conclusions are just as likely to upset politically correct leftwingers as they are to ruffle the feathers of staunch conservatives. But don't get the idea that this is any kind of a tract: Brookmyre is a man who knows that ideas in novels must always be at the service of the narrative and that's very much the case here. Jack Parlabane's one-liners are as spot-on as ever, and the juggling of violence and black humour is as precisely judged as we expect from this writer.' - Barry Forshaw, AMAZON.CO.UK REVIEW

Chris Brookmyre was a journalist before becoming a full time novelist with the publication of QUITE UGLY ONE MORNING. Since the publication of A BIG BOY DID IT AND RAN AWAY he and his family have moved away from Aberdeen and now live near Glasgow. Oh, yes.

GOR001044904
Be My Enemy by Christopher Brookmyre
Christopher Brookmyre
Jack Parlabane
Used - Very Good
Paperback
Little, Brown Book Group
2004-09-02
416
0349116814
9780349116815
N/A
Book picture is for illustrative purposes only, actual binding, cover or edition may vary.
This is a used book - there is no escaping the fact it has been read by someone else and it will show signs of wear and previous use. Overall we expect it to be in very good condition, but if you are not entirely satisfied please get in touch with us.