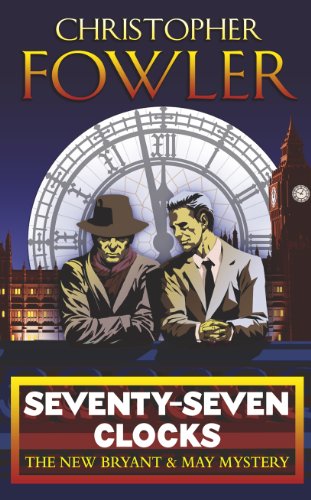 In Stock
£9.99
As the hours of daylight diminish towards Christmas, Bryant & May, the irascible detectives of London's controversial Peculiar Crimes Unit, know that time is the key - and time is running out for both the family and the police.
Very Good
Only 1 left

'The newspapers referred to it as the case of the seventy-seven clocks. There was quite a fuss at the time. We got into terrible trouble. Dear fellow, it was one of our most truly peculiar cases. I remember as if it was yesterday.' In fact, Arthur Bryant remembers very little about yesterday, but he does remember the oddest investigation of his career...
It was late in 1973. As strikes and blackouts ravaged the country during Edward Heath's 'Winter of Discontent', sundry members of a wealthy, aristocratic family were being disposed of in a variety of grotesque ways - by reptile, by bomb, by haircut. As the hours of daylight diminish towards Christmas, Bryant & May, the irascible detectives of London's controversial Peculiar Crimes Unit, know that time is the key - and time is running out for both the family and the police. Their investigations lead them into a hidden world of class conflict, craftsmanship and the secret loyalties of big business. But what have seventy seven ticking clocks to do with it?
Now the full story can at last be revealed, in this most eerie of adventures that features Arthur Bryant at his rudest, John May at his most exasperated and a gallery of colourful, bizarre characters who could only make their home in a city like London...

Witty, sinuous and darkly comedic storytelling from a Machiavellian jokester -- Maxim Jacubowski * GUARDIAN *
Witty, charming, and informed about London, but - this is important - the storylines are vivid, tough and have a hard edge -- Marcel Berlins * THE TIMES *

Christopher Fowler is the author of more than forty novels (sixteen of which feature the detectives Bryant and May and the Peculiar Crimes Unit) and many short story collections. A multiple award-winner, including the coveted CWA 'Dagger in the Library', Chris has also written screenplays, video games, graphic novels, audio plays and two acclaimed memoirs, Paperboy and Film Freak. His most recent non-fiction book is The Book of Forgotten Authors. Chris divides his time between London's King's Cross and Barcelona. You can find out more by visiting his website and following him on Twitter.

GOR001114242
Seventy-Seven Clocks: (Bryant & May Book 3) by Christopher Fowler
Christopher Fowler
Bryant & May
Used - Very Good
Paperback
Transworld Publishers Ltd
2006-09-01
480
0553817191
9780553817195
N/A
Book picture is for illustrative purposes only, actual binding, cover or edition may vary.
This is a used book - there is no escaping the fact it has been read by someone else and it will show signs of wear and previous use. Overall we expect it to be in very good condition, but if you are not entirely satisfied please get in touch with us.