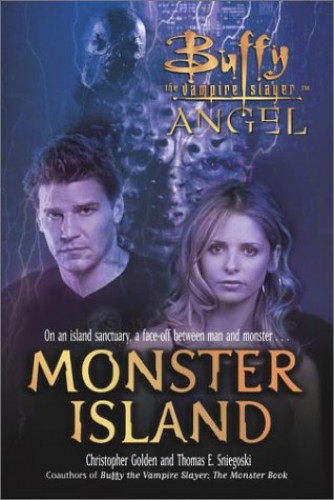 In Stock
£5.99
On a small island off the coast of California, a showdown is scheduled between Buffy and a pure-demon army, with nothing less than the fate of the world, and a human soul, at stake.
Very Good
Only 1 left

Since he arrived in Los Angeles, Angel's mission has been to help the helpless. He has saved countless innocents in his city. However, one escaped his grasp: Doyle, the hard-drinking, easy-living half-demon who came to Angel on a vision quest. Doyle sacrificed himself and in turn reconciled his internal conflict toward his own demonic heritage, leaving Angel (with Cordelia and, ultimately, a new cadre) to carry on with the good fight. And fight they do.

But as the group squares off against evil in the City of Angels, little do they know that back in Sunnydale trouble is brewing as usual. A shakedown of snitches yields info: Someone "other" than Buffy has been slaying -- and whoever it is, he or she is strictly after half-breeds, going so far as to lie in wait to attack. It doesn't add up, and the Scoobies are stumped.

Back in L.A. the picture becomes clearer when Angel Investigations is visited by an unexpected guest. It's Doyle's father, a Brachen demon named Axtius. He's come to give Doyle a gift: Daddy's going to rid Doyle of his pesky human side. In fact he's looking to rid the world of half-breeds. He's not happy to learn that Doyle's gone, and if someone is to be blamed, it's Angel. But Axtius doesn't have time to point fingers -- he knows where the mixed-blood demons have set up camp. Before long Buffy and her avengers have assembled right alongside Angel and Co. Both slayer and vampire have skirted the boundaries of humanity, but neither can support a massacre. A crime against monsters is a crime nonetheless....

GOR003567001
Monster Island: Angel & Buffy the Vampire Slayer by Christopher Golden
Christopher Golden
Buffy the Vampire Slayer: Angel
Used - Very Good
Hardback
Simon & Schuster
2003-07-02
448
0689856652
9780689856655
N/A
Book picture is for illustrative purposes only, actual binding, cover or edition may vary.
This is a used book - there is no escaping the fact it has been read by someone else and it will show signs of wear and previous use. Overall we expect it to be in very good condition, but if you are not entirely satisfied please get in touch with us.