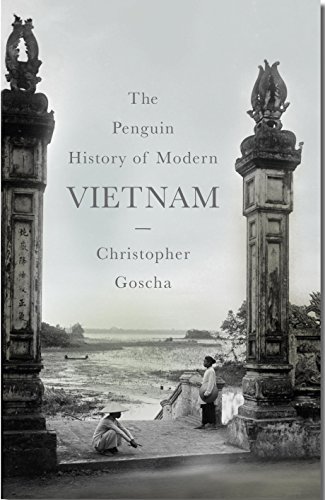 The Penguin History of Modern Vietnam
by Christopher Goscha

In Stock
£19.99
The Vietnamese are in the unusual situation of being both colonizers themselves and the victims of colonization by others. This book describes both the grand narrative of Vietnam's story but also many of the byways and what ifs. It also focuses on the minority groups who have done so much over the centuries to define the many versions of Vietnam.
Very Good
Only 1 left

The Penguin History of Modern Vietnam by Christopher Goscha

'This is the finest single-volume history of Vietnam in English. It challenges myths, and raises questions about the socialist republic's political future' Guardian

'Powerful and compelling. Vietnam will be of growing importance in the twenty-first-century world, particularly as China and the US rethink their roles in Asia. Christopher Goscha's book is a brilliant account of that country's history.' - Rana Mitter

'A vigorous, eye-opening account of a country of great importance to the world, past and future' - Kirkus Reviews

Over the centuries the Vietnamese have beenboth colonizers themselves and the victims of colonization by others. Their country expanded, shrunk, split and sometimes disappeared, often under circumstances far beyond their control. Despite these often overwhelming pressures, Vietnam has survived as one of Asia's most striking and complex cultures.

As more and more visitors come to this extraordinary country, there has been for some years a need for a major history - a book which allows the outsider to understand the many layers left by earlier emperors, rebels, priests and colonizers. Christopher Goscha's new work amply fills this role. Drawing on a lifetime of thinking about Indo-China, he has created a narrative which is consistently seen from 'inside' Vietnam but never loses sight of the connections to the 'outside'. As wave after wave of invaders - whether Chinese, French, Japanese or American - have been ultimately expelled, we see the terrible cost to the Vietnamese themselves. Vietnam's role in one of the Cold War's longest conflicts has meant that its past has been endlessly abused for propaganda purposes and it is perhaps only now that the events which created the modern state can be seen from a truly historical perspective.

Christopher Goscha draws on the latest research and discoveries in Vietnamese, French and English. His book is a major achievement, describing both the grand narrative of Vietnam's story but also the byways, curiosities, differences, cultures and peoples that have done so much over the centuries to define the many versions of Vietnam.

For those who have wanted a distinct and comprehensive overview of Vietnam's history, this is it. Christopher Goscha has an eye for how history connects through generations and how a country can rise from disasters in a new form, without losing sight of its past -- Odd Arne Westad, author of Restless Empire: China and the World Since 1750
A splendid achievement. Christopher Goscha is one of our leading historians of modern Vietnam, and he shows it in this nuanced, fair-minded, deeply humane book. Destined to be a standard work on the subject -- Fredrik Logevall, Pulitzer Prize-winning author of Embers of War: The Fall of an Empire and the Making of America's Vietnam
Powerful and compelling. Vietnam will be of growing importance in the twenty-first-century world, particularly as China and the US rethink their roles in Asia. Christopher Goscha's book is a brilliant account of that country's history. Paying careful attention to Vietnamese voices as well as those of colonizers, he constructs a narrative that sets Vietnam in context, and makes it for western readers so much more than a half-remembered event in the Cold War -- Rana Mitter
A perceptive and much needed contribution to our understanding of Vietnam. Christopher Goscha's prodigious research is equaled only by his intimate understanding of Vietnamese culture, people, and history -- Larry Berman, author of Perfect Spy: The Incredible Double Life of Pham Xuan An, Time Magazine Reporter and Vietnamese Communist Agent
A vigorous, eye-opening account of a country of great importance to the world, past and future. * Kirkus Reviews *
Challenges myths, and raises questions about the socialist republic's political future... groundbreaking... Goscha manages the (not easy) task of showing Vietnam's complexity without losing the reader with too much detail... quite simply the finest, most readable single-volume history of Vietnam in English' -- Joshua Kurlantzick * Guardian *
Mr. Goscha is one of the most talented and prolific of a new group of American and French historians who have examined the modern history of Vietnam not in regard to the country's relationship to the U.S. or the Cold War but on its own terms... a concise, insightful and readable guide to the complexity and variety of Vietnam's modern history -- Ronald Spector * Wall St Journal *
Represents a milestone in Vietnamese history... [Goscha] is his generation's pre-eminent academic historian of modern Vietnam...Goscha's approach must be seen as a monumental step forward in efforts to make sense of the fundamental political fissures that plunged Vietnam into one of the longest and bloodiest civil wars of the twentieth century. -- Peter Zinoman * Mekong Review *

Christopher Goscha is professor of history at the University of Quebec at Montreal. He has spent much of his adult life studying the people, politics and history of Southeast Asia, particularly Thailand, Cambodia, Laos and Vietnam. He studied at Georgetown University and the Ecole Pratique des Hautes Etudes (IVeme Section, La Sorbonne). He has written extensively about many of the different regions of Indo-China.

GOR007678199
The Penguin History of Modern Vietnam by Christopher Goscha
Christopher Goscha
Used - Very Good
Hardback
Penguin Books Ltd
2016-06-30
672
1846143101
9781846143106
N/A
Book picture is for illustrative purposes only, actual binding, cover or edition may vary.
This is a used book - there is no escaping the fact it has been read by someone else and it will show signs of wear and previous use. Overall we expect it to be in very good condition, but if you are not entirely satisfied please get in touch with us.