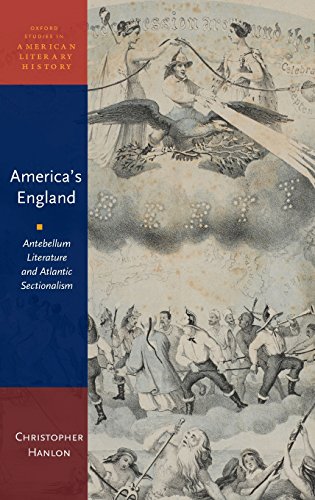 In Stock
£3.29
This book examines the maneuvers through which U.S. partisans encoded the turmoil of antebellum America in terms of English affiliation. Demonstrating that English genealogies, geographies, and economics encoded the sectional crisis for southern and northern Americans, it locates sectionalism in a broader Atlantic context of cultural imagination and literary production.
Very Good
Only 1 left

America's England examines the patterns of affiliation through which U.S. writers, public intellectuals, politicians, and aesthetes encoded the political turmoil of antebellum America in terms of imagined connections with England. Demonstrating that English genealogies, geographies, and economics encoded the sectional crisis for antebellum Americans on both sides of the Mason-Dixon, it locates many of the crisis points of antebellum America in a broader transatlantic constellation that provided distinctive circumstances for literary production. Through engagement with contemporaneous renditions of English race, history, landscape aesthetics, transatlantic telecommunications, and economic discourse, northern and southern partisans-abolitionists, Unionists, and slaveholders alike-re-imagined the terms behind their antagonisms, forming a transatlantic surround for the otherwise irreducibly cisatlantic political struggles that would dissolve the Union in 1861. Among other ramifications, the re-conceptualization of sectional issues in transatlantic terms undermined the notion that white citizens of the United States formed a unified biological or cultural community, effectively polarizing the imagined ethnic and cultural bases of the American polity. But beyond that, a continued reference to English historical, cultural, and political formations allowed public intellectuals and authors such as Ralph Waldo Emerson, Frederick Douglass, Henry Timrod, Lydia Maria Child, Nathaniel Hawthorne, William Gilmore Simms, John Pendleton Kennedy, Charles Sumner, and Henry Herbert to situate an era of developing national acrimony along longer historical and transnational curves, forming accounts of national crisis that situated questions of a domestic political bearing at oceanic removes from northern and southern combatants.

Indeed, it is Hanlon's welcome focus on the South, and the usefulness of his new term, Atlantic sectionalism, that will earn the book its place in the field of nineteenth-century American studies. * Joseph Rezek, Journal of American Studies *
[This book] underscore[s] the vital importance of ... reading the American Civil War in all its genres and across its full duree, and of resisting the tendency to see the conflict as cisatlantic, rather than implicated in transatlantic and global modes of expression and exchange. * Elizabeth Duquette, American Literature *
America's England is an ambitious, subtle account of the ways in which transatlantic engagements in the nineteenth century reflect back on the meaning and politics of sectional conflict before the Civil War. Christopher Hanlon commandingly shows how debates about America's future turned on strategic, and often fantastic, invocations of English character and history. It is an illuminating book on the surprisingly local effects of international ties. * Elisa Tamarkin, author of Anglophilia: Deference, Devotion, and Antebellum America *
When the long foreground of the American Civil War is recast on a transatlantic stage, Emerson plays an unexpected lead, first in celebrating and then in rebuking English example. America's England is a venturesome measure of Saxon villeins and Norman aristocrats, of picturesque priorities in the wake of the Fugitive Slave Law, and of American liberty perpetually redefined. * Kathleen Diffley, editor of To Live and Die: Collected Stories of the Civil War, 1861-1876 *
America's England crucially contributes to Atlantic studies in its methodology and in its study of sectional self-fashioning in antebellum literature. Tracing the transatlantic Saxon/Norman discourses contradictorily crafted by northern and southern writers, and establishing the ways that transatlantic alliances provided leverage for a sectionalized national politics, especially regarding slavery, Christopher Hanlon offers a model for future work. America's England reveals why the national and the transnational are best studied dialectically, as interdependent formations, ideologically and materially. * Laura Doyle, author of Freedom's Empire: Race and the Rise of the Novel in Atlantic Modernity, 1640-1940 *
America's England is a trenchant, stunningly well-researched study. Hanlon is as adept at reading political, visual, and scientific commentary as he is at unpacking dense literary essays and ideologically fraught fiction. The book moves gracefully among such fields of inquiry as the economics of King Cotton, the threat and promise of telegraphic diplomacy, the social implications of the picturesque, and the pseudo-science of polygenesis. * Susan M. Ryan, author of The Grammar of Good Intentions: Race and the Antebellum Culture of Benevolence *
Recommended. * CHOICE *

Christopher Hanlon is Professor of American Literature at Eastern Illinois University, where he teaches courses in nineteenth-century U.S. and Atlantic literature and culture.

GOR008644212
America's England: Antebellum Literature and Atlantic Sectionalism by Christopher Hanlon (Professor of English, Eastern Illinois University)
Christopher Hanlon (Professor of English, Eastern Illinois University)
Oxford Studies in American Literary History
Used - Very Good
Hardback
Oxford University Press Inc
2013-04-15
256
0199937583
9780199937585
N/A
Book picture is for illustrative purposes only, actual binding, cover or edition may vary.
This is a used book - there is no escaping the fact it has been read by someone else and it will show signs of wear and previous use. Overall we expect it to be in very good condition, but if you are not entirely satisfied please get in touch with us.