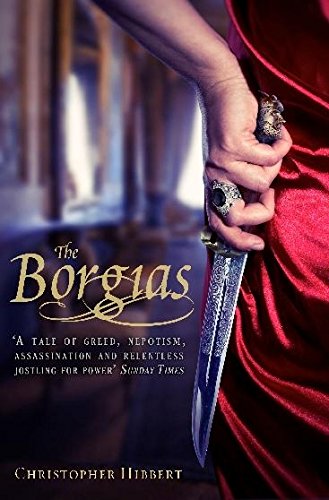 The Borgias
by Christopher Hibbert

The Borgias by Christopher Hibbert

The name Borgia is synonymous with the corruption, nepotism, and greed that were rife in Renaissance Italy.

The powerful, voracious Rodrigo Borgia, better known to history as Pope Alexander VI, was the central figure of the dynasty. Two of his seven papal offspring also rose to power and fame - Lucrezia Borgia, his daughter, whose husband was famously murdered by her brother, and that brother, Cesare, who served as the model for Niccolo Machiavelli's The Prince. Notorious for seizing power, wealth, land, and titles through bribery, marriage, and murder, the dynasty's dramatic rise from its Spanish roots to its occupation of the highest position in Renaissance society forms a gripping tale.

Erudite, witty, and always insightful, Hibbert removes the layers of myth around the Borgia family and creates a portrait alive with his superb sense of character and place.

Rather more than the story of an extraordinary and vicious family, The House Of Borgia is an engrossing account of a country divided up into a collection of constantly warring states, of
alliances made and broken and of almost unimaginable power and wealth there for the taking by those ruthless enough to let nothing stand in the way of their vaulting ambitions.

* Daily Express *
... a coherent and colourful historical record of the Borgias. * Literary Review *
Few could have told the story better ... pacy, uncluttered and an eye for resonant detail. Sparkling. * Tribune *
A tale of greed, nepotism, assassination and relentless jostling for power. * Sunday Times *
Hibbert tells a good story. * Times Literary Supplement *
In the last book he wrote before he died Hibbert captures quite brilliantly the extravagence and immorality at the heart of the papal empire on the eve of the Reeformation. * Good Book Guide *

Christopher Hibbert wrote more than fifty acclaimed books, including The Rise and Fall of the House of Medici and Rome: The Biography of a City. A leading popular historian whose works reflect meticulous scholarship, he was a Fellow of the Royal Society of Literature. He died in 2008.

GOR003090678
The Borgias by Christopher Hibbert
Christopher Hibbert
Used - Very Good
Paperback
Little, Brown Book Group
2007-11-20
336
1849019940
9781849019941
N/A
Book picture is for illustrative purposes only, actual binding, cover or edition may vary.
The book has been read but remains in clean condition. All pages are intact and the cover is intact. Some minor wear to the spine.