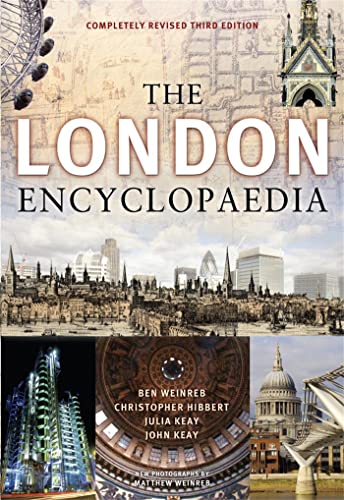 `There is no one-volume book in print that carries so much valuable information on London and its history.' Illustrated London News

The London Encyclopaedia is the most comprehensive book on London ever published. In its first new edition in over ten years, completely revised and updated, it comprises some 6,000 entries, organised alphabetically, cross-referenced and supported by two large indexes - one for the 10,000 people mentioned in the text and one general - and is illustrated with over 500 drawings, prints and photographs. Everything that is important in the history and culture of the capital is documented, whether vanished or extant, from its first settlement to the present day.

`If I had my way this book would be in every cab in London.' London Cabbie News

Christopher Hibbert is an historian and biographer. Born in Leicestershire in 1924, Hibbert was educated at Radley College and then Oxford University, before going on to serve as an infantry officer in the London Irish Rifles during the Second World War. He was wounded twice and awarded the Military Cross in 1945. In 1979, he joined Ben Weinreb in creating The London Encyclopaedia, and he has also written books on London, Venice, Florence and Rome, among others. He continues to be published internationally and is a Fellow of the Royal Society of Literature. Ben Weinreb (1912-1999) was a self-taught bibliophile with a particular interest in architecture. From humble beginnings in a Bloomsbury basement, he went on to become the world's leading antiquarian architectural bookseller, always aided and encouraged by his wife, Joan. In 1969, he started to compile and enlist contributors for The London Encyclopaedia, which was first published in 1983. John Keay, once a history scholar at Magdalen College, Oxford, has written some twenty books, mostly works of history. He is married to Julia Keay and they have four children. Julia Keay is co-editor with John Keay of the Collins Encyclopaedia of Scotland and author of The Spy Who Never Was, With Passport and Parasol and Alexander the Corrector.

GOR002604326
The London Encyclopaedia (3rd Edition) by Christopher Hibbert
Christopher Hibbert
Used - Very Good
Hardback
Pan Macmillan
2008-08-15
1104
1405049243
9781405049245
N/A
Book picture is for illustrative purposes only, actual binding, cover or edition may vary.
This is a used book - there is no escaping the fact it has been read by someone else and it will show signs of wear and previous use. Overall we expect it to be in very good condition, but if you are not entirely satisfied please get in touch with us.