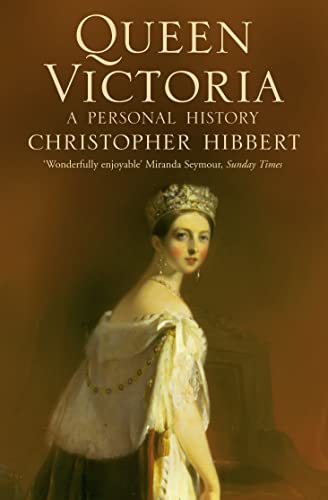 Christopher Hibbert's acclaimed biography of Queen Victoria is as impressive and authoritative as the great woman herself.

Christopher Hibbert's acclaimed biography of Queen Victoria is as impressive and authoritative as the great woman herself.

In 1837 an eighteen-year-old girl, raised by a German mother, inherited the throne of the United Kingdom. She was to reign as queen - and later Empress of India - for almost sixty-four years, presiding over twenty prime ministers and a period of unprecedented social and political change. Her era became synonymous with moral rigidity and colonial expansion, and this absorbing biography of Queen Victoria, the unlikely figurehead of a vast and powerful empire, explores how the young monarch transformed herself into a formidable matriarch and the epitome of an age.

Embracing her life and family, her politics and personality, her love for Prince Albert and her relationship with John Brown, Hibbert's touching biography is a persuasive portrait of a remarkable woman.

`This book is, I think, his masterpiece...he has portrayed her as physically and imaginatively passionate, a loveable monster who, for all her extreme oddness, came to embody the aspirations and character not only of a nation, but of an Empire which embraced half the globe.' A. N. Wilson, Daily Mail

`A splendid book in every respect.' Simon Heffer, Country Life

`[Hibbert] succeeds in weaving a vast tangle of sources into a driving story. It is a testimony to his skill that he manages to make his 557-page book feel, If anything, a tad too short... it meticulously fleshes out the little butterball of a woman who came to dominate not only her own time, but ours as well.' Kathryn Hughes, Daily Telegraph

`A deliciously gossipy but thoughtful biography...an exceptional portrait of a homely, formidably strong-willed woman who used her power both admirably and abominably.' Miranda Seymour, Sunday Times

`A lively, episodic account of a remarkable woman's life...particularly strong on the stifling dullness of court life, Victoria's extraordinary relations with her Scottish and Indian servants, and her absolute domination of her children.' Evening Standard

`An unrivalled portrait of a marriage...she emerges from his compelling narrative a more real, complex and fascinating figure than ever before.' Financial Times

`This personal history provides as much food for thought as it does narrative energy and excitement.' Scotsman

Christopher Hibbert was educated at Radley and Oriel College, Oxford. He served as an infantry officer during the war, was twice wounded and was awarded the MC in 1945. His books include `The Destruction of Lord Raglan' (which won the Heinemann Award for Literature in 1962), `The English: A Social History', `Cavaliers and Roundheads' and `The Great Mutiny: India, 1857'. He also wrote biographies of Elizabeth I, George III, George IV, Nelson, Wellington and Samuel Johnson. He died in 2008.

GOR001326255
Queen Victoria: A Personal History by Christopher Hibbert
Christopher Hibbert
Used - Very Good
Paperback
HarperCollins Publishers
2001-09-03
576
0006388434
9780006388432
N/A
Book picture is for illustrative purposes only, actual binding, cover or edition may vary.
This is a used book - there is no escaping the fact it has been read by someone else and it will show signs of wear and previous use. Overall we expect it to be in very good condition, but if you are not entirely satisfied please get in touch with us.