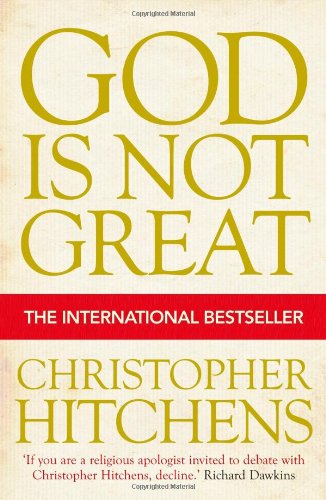 God Is Not Great
by Christopher Hitchens

God Is Not Great Summary

God Is Not Great by Christopher Hitchens

In god is Not Great Hitchens turned his formidable eloquence and rhetorical energy to the most controversial issue in the world: God and religion. The result is a devastating critique of religious faith

god Is Not Great is the ultimate case against religion. In a series of acute readings of the major religious texts, Christopher Hitchens demonstrates the ways in which religion is man-made, dangerously sexually repressive and distorts the very origins of the cosmos. Above all, Hitchens argues that the concept of an omniscient God has profoundly damaged humanity, and proposes that the world might be a great deal better off without 'him'.

God Is Not Great Reviews

Do yourself a favor and skip the Dawkins and Harris; they're smug, turgid, and boring, with all the human feeling of a tax return. Read Hitchens instead... A tendentious delight, a caustic and even brilliant book... Thank God for Christopher Hitchens. -- Mark Warren * Esquire *
Dazzling... A campaign to put this glittering anti-theist tract on the national curriculum for "religious education" should begin here. -- Johann Hari * Independent *
Hitchens is a grand rhetorician, and his double-barrelled shotgun of a book is high entertainment... As with Voltaire, his scornful laughter is a powerful weapon. -- Christopher Hart * Sunday Times *
The anti-religion case has never been put so well, so comprehensively or so definitively as in this razor-sharp book... Hitchens accumulates a devastating case... Outstanding. -- A.C. Grayling * Independent on Sunday *
Christopher Hitchens is a master craftsman of argument... God is not Great is undoubtedly the most boisterously entertaining contribution to the [atheism] debate. -- Siobhan Murphy * Metro *
God is not Great is easily the most brilliant and fascinating contemplation upon the role of religion in human society in recent times, the Das Kapital of a tolerant, if exasperated, atheism. -- Kevin Myers * Irish Independent *

Christopher Hitchens (1949-2011) was a contributing editor to Vanity Fair and Visiting Professor in liberal studies at the New School in New York. He was the author of numerous books, including works on Thomas Jefferson, Thomas Paine, George Orwell, Mother Theresa, Henry Kissinger and Bill and Hillary Clinton, as well as the international bestseller and National Book Award nominee, god Is Not Great.

GOR001255436
God Is Not Great by Christopher Hitchens
Christopher Hitchens
Used - Very Good
Paperback
Atlantic Books
2008-03-01
320
1843545748
9781843545743
Short-listed for United States National Book Awards: Nonfiction 2007
Book picture is for illustrative purposes only, actual binding, cover or edition may vary.
This is a used book - there is no escaping the fact it has been read by someone else and it will show signs of wear and previous use. Overall we expect it to be in very good condition, but if you are not entirely satisfied please get in touch with us.