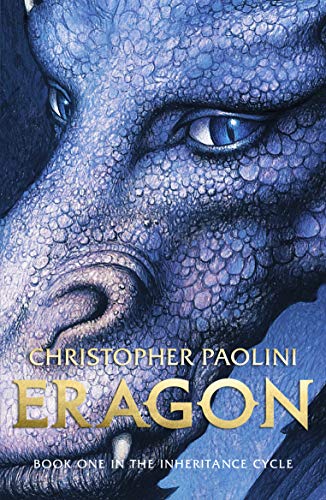 Out of Stock
The first book in The Inheritance Series When poor farm boy Eragon finds a polished stone in the forest, he thinks it's a lucky discovery. To navigate this dark terrain, and survive his cruel king's evil ways, he must take up the mantle of the legendary Dragon Riders.
Very Good
Only 0 left

Eragon: Book One by Christopher Paolini

The first book in The Inheritance Series When poor farm boy Eragon finds a polished stone in the forest, he thinks it's a lucky discovery. Perhaps, he will be able to buy his family food for the winter. But, when a baby dragon hatches out of the stone, Eragon realises he's stumbled upon a legacy nearly as old as the Empire itself. His simple life is shattered, and he's thrust into a perilous new world of destiny, magic and power. To navigate this dark terrain, and survive his cruel king's evil ways, he must take up the mantle of the legendary Dragon Riders. Will he succeed? The fate of the Empire rests in his hands. . .

"A compelling and action-filled adventure . . . A galloping good example of its genre" * Daily Telegraph *
"This book is an achievement. Readers will be transported" * The Sunday Times *
"A portrayal of true affection between boy and dragon - Paolini writes like someone gripped by his own story" * Guardian *
"A stirring fantasy of epic proportions" * The Bookseller *
"Christopher has created a complex and fascinating world in this first book of his Eragon trilogy . . . Filled with history, ancient tales, magic, magical creatures, and with a superbly crafted story "Eragon" is sure to delight many lovers of fantasy tales" * Through the Looking Glass *

Christopher Paolini was educated at home by his parents. His abiding love of fantasy and science fiction inspired him to begin writing his debut novel, Eragon, when he graduated from high school at fifteen. He became a New York Times bestselling author at nineteen. Christopher lives in Montana, USA, where the dramatic landscape fed his vision of Alagaesia. Inheritance, the final book in the sequence, was published in November 2011.

GOR001049744
Eragon: Book One by Christopher Paolini
Christopher Paolini
The Inheritance Cycle
Used - Very Good
Paperback
Random House Children's Publishers UK
2005-01-03
528
0552552097
9780552552097
N/A
Book picture is for illustrative purposes only, actual binding, cover or edition may vary.
This is a used book - there is no escaping the fact it has been read by someone else and it will show signs of wear and previous use. Overall we expect it to be in very good condition, but if you are not entirely satisfied please get in touch with us.