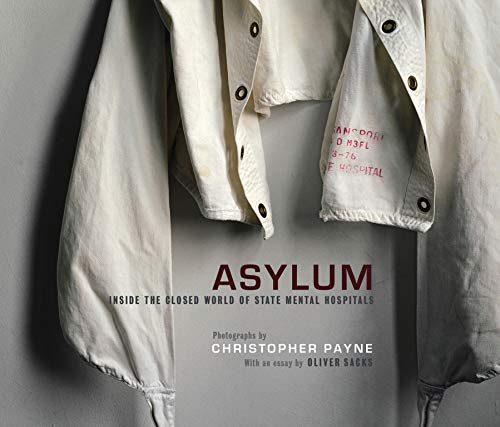 Asylum: Inside the Closed World of State Mental Hospitals by Christopher Payne

For more than half the nation's history, vast mental hospitals were a prominent feature of the American landscape. From the mid-nineteenth century to the early twentieth, over 250 institutions for the insane were built throughout the United States; by 1948, they housed more than a half million patients. The blueprint for these hospitals was set by Pennsylvania hospital superintendant Thomas Story Kirkbride: a central administration building flanked symmetrically by pavilions and surrounded by lavish grounds with pastoral vistas. Kirkbride and others believed that well-designed buildings and grounds, a peaceful environment, a regimen of fresh air, and places for work, exercise, and cultural activities would heal mental illness. But in the second half of the twentieth century, after the introduction of psychotropic drugs and policy shifts toward community-based care, patient populations declined dramatically, leaving many of these beautiful, massive buildings-and the patients who lived in them-neglected and abandoned.

Architect and photographer Christopher Payne spent six years documenting the decay of state mental hospitals like these, visiting seventy institutions in thirty states. Through his lens we see splendid, palatial exteriors (some designed by such prominent architects as H. H. Richardson and Samuel Sloan) and crumbling interiors-chairs stacked against walls with peeling paint in a grand hallway; brightly colored toothbrushes still hanging on a rack; stacks of suitcases, never packed for the trip home. Accompanying Payne's striking and powerful photographs is an essay by Oliver Sacks (who described his own experience working at a state mental hospital in his book Awakenings). Sacks pays tribute to Payne's photographs and to the lives once lived in these places, "where one could be both mad and safe."

The book will appeal to historians or scholars of material culture as well as to the medical personnel, photography lovers, and citizens familiar with the lore and lure of asylums.

-Jane Simonsen, The Annals of Iowa

Astoundingly beautiful work on a subject that rarely gets the attention.

...Asylum is of enormous value, as a record of how such places looked in their final years. More than that, and despite its dismal subject matter, it makes for a remarkable and endlessly fascinating book, one that can be recommended with enthusiasm to both the architectural historian and the general reader.

-Times Literary Supplement
Christopher Payne is a photographer and practicing architect in New York City and the author of New York's Forgotten Substations: The Power Behind the Subway. The late Oliver Sacks was a neurologist and the author of The Man Who Mistook His Wife for a Hat, Awakenings, Musicophilia, and other books.
GOR006218185
9780262013499
0262013495
Asylum: Inside the Closed World of State Mental Hospitals by Christopher Payne
Christopher Payne
The MIT Press
Used - Very Good
Hardback
MIT Press Ltd
2009-09-04
209
Winner of <PrizeName>Winner, 2010 Ken Book Award presented by the National Alliance on Mental Illness of New York City Metro (NAMI-NYC Metro)</PrizeName> 2010
Book picture is for illustrative purposes only, actual binding, cover or edition may vary.
This is a used book - there is no escaping the fact it has been read by someone else and it will show signs of wear and previous use. Overall we expect it to be in very good condition, but if you are not entirely satisfied please get in touch with us
Trustpilot