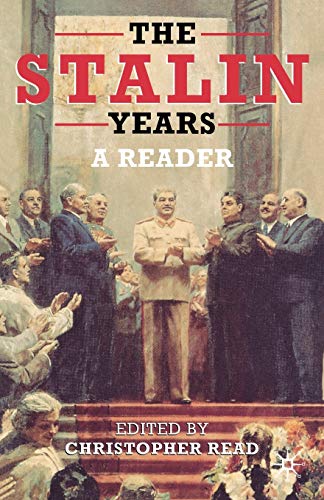 The Stalin Years
by Christopher Read

In Stock
£2.39
This reader gives students a clear route into the debate surrounding Stalin's Russia. Christopher Read takes students through the history of the Stalin years, covering the key points of his rule from the late 1920s to the post-war years, using post-Soviet articles.
Like New
Only 1 left

The Stalin Years: A Reader by Christopher Read

Ever since his rise to power Stalin has been a controversial figure. From the hatred of his Trotsky-supporting contemporaries to the uncritical adulation of present-day followers in Russia and his native land of Georgia he has stirred passions and arguments. Traditionally, scholars, too, have been equally divided into totalitarians and revisionists. Despite the differences, however, one feature has remained constant: the vast majority of views of Stalin have been highly politically charged.

In this collection of cutting-edge research, Christopher Read guides the reader through the turbulent history of the Stalin years using post-Soviet articles which provide more balanced and scholarly assessments of the leader's time in power. The essays examine not only Stalin's central role and the key points of his rule from the late 1920s to the postwar years, but also look at Russian society as a whole. Taken together with Read's own contributions, which include an up-to-date historiographic survey, they constitute a complex and dynamic history of the central features of a terrible era.

Containing a helpful glossary and a chronology of the life and times of Stalin, this indispensable volume will be the first recourse for all those with an interest in the debates surrounding Stalin's Russia.

'This is a very welcome, interesting and useful addition to the literature on Stalin and the Stalinist system. It will make available a diverse selection of material. The material contributed by the editor is also very useful: clearly written, balanced and yet also provocative in places. It provides an excellent introduction to the historiography, and importantly locates it in the wider historical, cultural and political context of its time.' - Mark Sandle, De Montfort University 'Particularly helpful for those wanting to write essays at a creative, non-superficial level.' - Dr David Collins, University of Leeds 'Don't let this book go past you if you teach this field.' - History Teaching Review

CHRISTOPHER READ is Professor of History at the University of Warwick.

Acknowledgements.- Foreword.- Glossary.- Stalin's Life and Times.- PART 1: MAIN CURRENTS OF INTERPRETATION OF STALIN AND THE STALIN YEARS.- During Stalin's Lifetime.- The Rise of Revisionism.- Perestroika and After.- PART 2: CULTURAL REVOLUTION.- Social Modernization- The Modernization of Russian Motherhood 1917-37; E.Waters.- Towards the 'New Soviet Person': The Assault on Religion.- The 1929 Congress of the Godless; D.Peris.- PART 3: INDUSTRIALIZATION AND COLLECTIVIZATION.- The Drive to Industrialize.- Building the 'Soviet Detroit': The Construction of the Nizhnii Novgorod Automobile Factory, 1927-1932; K.Schulz.- The Assault on the Peasantry.- Stalin, Grain Stocks and the Famine of 1932-1933; S.Wheatcroft, M.Tauger and R.W.Davies.- PART 4: THE GREAT TERROR.- Why Did the Terror Take Place?.- The Objectives of the 'Great Terror'; O.Khlevnyuk.- The Purges in the Provinces.- How the Mice Buried the Cat: Scenes from the Great Purges of 1937 in the Russian Provinces; S.Fitzpatrick.- PART 5: THE GREAT FATHERLAND WAR.- Soviet Women at War; J.Erickson.- PART 6: THE FINAL YEARS.- The Cold War.- Moscow and the Marshall Plan: Politics, Ideology and the Onset of the Cold War, 1947; G.Roberts.- Stalin's Dictatorship in the Final Years.- Stalin's Cabinet: the Politburo and Decision Making in the Post-War Years; Y.Gorlizki.- PART 7: SOME REFLECTIONS ON STALINISM.- Stalinism as a Civilization.- Stalinism as a Civilization; S.Kotkin.- The Emerging Picture: Some Concluding Thoughts.- Notes.- Bibliography.- Index.

GOR008618821
The Stalin Years: A Reader by Christopher Read
Christopher Read
Used - Like New
Paperback
Macmillan Education UK
2002-12-10
241
0333963431
9780333963432
N/A
Book picture is for illustrative purposes only, actual binding, cover or edition may vary.
The book has been read, but looks new. The book cover has no visible wear, and the dust jacket is included if applicable. No missing or damaged pages, no tears, possible very minimal creasing, no underlining or highlighting of text, and no writing in the margins.