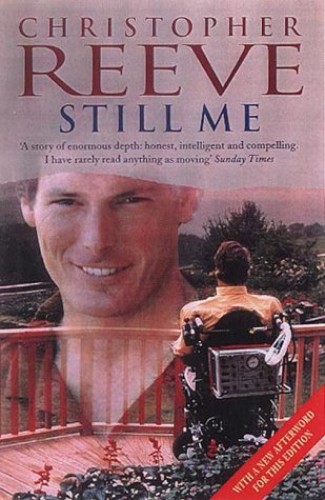 Still Me
by Christopher Reeve

In Stock
£4.49
Through his leading role in the three Superman films, Christopher Reeve became so closely identified with the superhero that he wasn't just seen as the actor who played Superman, he was Superman.
Very Good Good
6 in stock

Still Me by Christopher Reeve

Through his leading role in the three Superman films, Christopher Reeve became so closely identified with the superhero that he wasn't just seen as the actor who played Superman, he was Superman. Which is why the tragic riding accident which left him paralysed from the neck down shocked the world. Superman was not superhuman. It is also why he is now the world's most recognisable person in a wheelchair. In true superhero style, Christopher Reeve refuses to resign himself to the life of a quadriplegic, and is actively campaigning to raise the profile of spinal-cord injury victims and research. Although he was initially told that he would only ever be able to move his head, he can now shrug his shoulders and breathe alone for increasing periods of time, and is determined that he will walk again. It is this extraordinary courage and determination that has made Christopher Reeve the internationally admired figure that he is, and it is this bravery which makes this autobiography about his paralysis and his journey to recovery such a powerful and moving story.

"A story of enormous depth: honest, intelligent and compelling. I have rarely read anything as moving" * Sunday Times *
"Brave, funny and deeply moving" * Sunday Telegraph *
"Fascinating and utterly lacking in self-pity" * Guardian *
"Through his honesty, dignity, and clarity of purpose, Reeve has created an involving book and a meaningful life" * New York Times Book Review *
"Still me redefines the idea of hero . . . In this detailed and well-written autobiography, Reeve proves that, in many ways, he has transcended previous accomplishments through his courage and character" * Boston Globe *

Christopher Reeve established a reputation as one of America's leading actors through his role as the world's favourite superhero, Superman. After being paralysed in an accident in an equestrian competition in 1995, he put a human face on spinal cord injury. Reeve was chairman of the board of the Christopher Reeve Paralysis Foundation (CRPF) and vice chairman of the National Organisation on Disability and lobbied vigorously for healthcare reform and funding of research. Nothing is Impossible, his follow-up autobiography to Still Me, was published by Century in 2002. He died in 2004.

GOR000350917
Still Me by Christopher Reeve
Christopher Reeve
Used - Very Good
Paperback
Cornerstone
1999-04-01
336
0099257289
9780099257288
N/A
Book picture is for illustrative purposes only, actual binding, cover or edition may vary.
This is a used book - there is no escaping the fact it has been read by someone else and it will show signs of wear and previous use. Overall we expect it to be in very good condition, but if you are not entirely satisfied please get in touch with us.