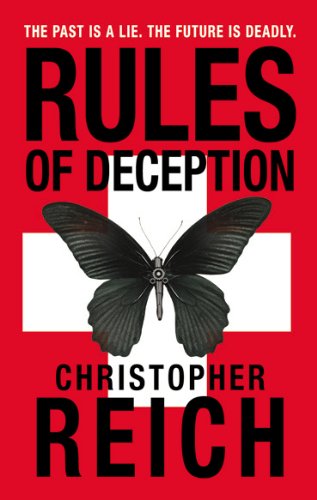 Rules of Deception
by Christopher Reich

In Stock
£4.49
Doctor Jonathan Ransom thought he knew everything about his wife Emma until she was killed in a tragic skiing accident in the Swiss Alps. They had been married for eight years, eight blissful years in which they had travelled the world together. When is your wife not your wife?
Very Good
Only 3 left

Rules of Deception by Christopher Reich

Doctor Jonathan Ransom thought he knew everything about his wife Emma until she was killed in a tragic skiing accident in the Swiss Alps. They had been married for eight years, eight blissful years in which they had travelled the world together. But the day after her death a mysterious letter addressed to her arrives at their hotel. When he opens it, his beliefs begin to unravel -- fast. . In the envelope is a railway baggage check to a suitcase that reveals an Emma far removed from the down-to-earth nurse who has been his constant and loyal companion all those years. In it he discovers the clues to a double life. Was she having an affair? When is your wife not your wife? And when she is not your wife, who is she? The answers begin right outside the train station where two policeman are waiting - to kill him. There are more answers as Jonathan escapes and the action sweeps him through Switzerland on a quest to discover the truth abut Emma. He is pursued by ruthless killers, entangled in an international conspiracy that touches all the world's Security Services and which will end in a denouement which is as breathtaking as it is totally unexpected.

"Christopher Reich is one of my favorite suspense writers and he's outdone himself this time. From the ingenious opening, featuring a butterfly of all things, to the mind-blowing switcheroo ending, this is a book and a movie, all in one!"" * James Patterson *
"RULES OF DECEPTION delivers pure suspense, intrigue, and adventure from its first page to its last. Christopher Reich is the master of the espionage thriller for the 21st century." * Clive Cussler *
"Fast-paced and intriguing, RULES OF DECEPTION is a great internationalthriller full of twists and turns that kept me guessing to the very end. A very enjoyable read." * Kate Mosse *
"Rules of Deception packs a wallop. Christopher Reich is at the top of his game." * David Baldacci *
"Once again, Chris Reich is firing on all cylinders. Rules of Deception is a supple, elegant thriller with a beguiling sophistication. Reich catches the reader on page one and utterly commands you to finish through a plot that carries triumphantly from one thrilling climax to another. He certainly knows how to manipulate the reader in exciting ways, and he's an expert (as his award winning The Patriots Club proved) in creating a riveting imagined world so real you wonder if it was actually imagined." * Steve Berry, author of The Alexandria Link *

Christopher Reich is the author of several financial thrillers including The Devil's Banker, The Patriot's Club and The First Billion.

GOR001213844
Rules of Deception by Christopher Reich
Christopher Reich
Used - Very Good
Paperback
Cornerstone
2009-07-02
400
0099534460
9780099534464
N/A
Book picture is for illustrative purposes only, actual binding, cover or edition may vary.
This is a used book - there is no escaping the fact it has been read by someone else and it will show signs of wear and previous use. Overall we expect it to be in very good condition, but if you are not entirely satisfied please get in touch with us.