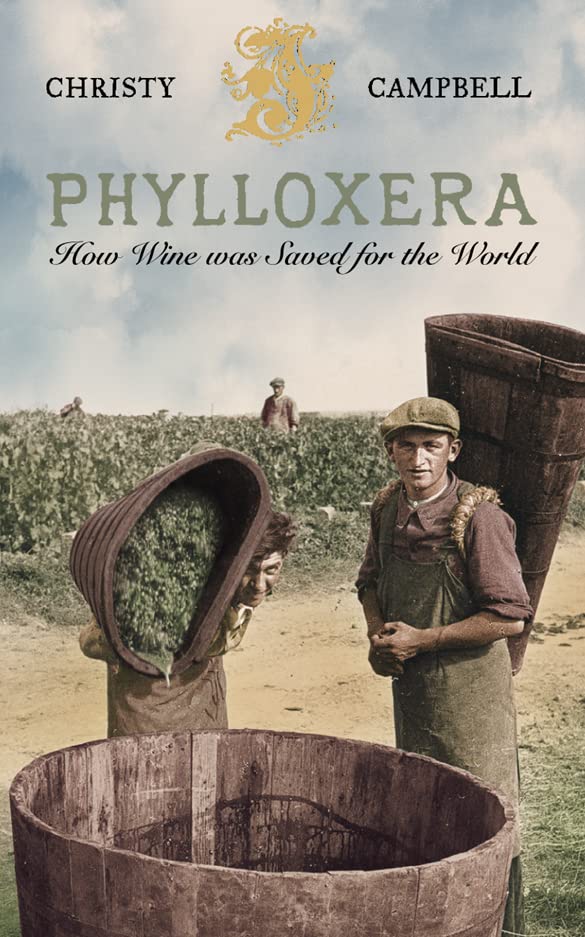 A historical investigation into the mysterious bug that wiped out the vineyards of France and Europe in the 1860s - and how one young botanist eventually 'saved wine for the world'.

Phylloxera: How Wine was Saved for the World by Christy Campbell

A historical investigation into the mysterious bug that wiped out the vineyards of France and Europe in the 1860s - and how one young botanist eventually 'saved wine for the world'.

In the early 1860s, vines in the lower Rhone valley, and then around Bordeaux, inexplicably began to wither and die. Panic seized France, and Jules-Emile Planchon, a botanist from Montpellier, was sent to investigate. Magnifying glass in hand, he discovered the roots of a dying vine covered in microscopic yellow insects. The tiny aphid would be named Phylloxera vastatrix - 'the dry leaf devastator'. Where it had come from was utterly mysterious, but it advanced with the speed of an invading army. As the noblest vineyards of France came under biological siege, the world's greatest wine industry tottered on the brink of ruin. The grand owners fought the aphid with expensive insecticide, while peasant vignerons simply abandoned their ruined plots in despair. Within a few years the plague had spread across Europe, from Portugal to the Crimea.

Planchon, aided by the American entomologist Charles Riley, discovered that the parasite had accidentally been imported from America. He believed that only the introduction of American vines, which appeared to have developed a resistance to the aphid, could save France's vineyards. His opponents maintained that this would merely assist the spread of the disease. Meanwhile, encouraged by the French government's offer of a prize of 300,000 gold francs for a remedy, increasingly bizarre suggestions flooded in, and many wine-growing regions came close to revolution as whole local economies were obliterated. Eventually Planchon and his supporters won the day, and phylloxera-resistant American vines were grafted onto European root-stock. Despite some setbacks - the first fruits of transplanted American vines were universally pronounced undrinkable - by 1914 all vines cultivated in France were hybrid Americans.

Phylloxera is an entertaining, revealing and frequently astonishing account of one of the earliest and most successful applications of science to an ecological disaster.

'An entertainingly educational story of scientific exploration, political filibustering, profiteering skulduggery and a disaster that was nearly total... This is not just a book for wine buffs. An intoxicating read.' Peter Millar, The Times

'The extraordinary tale of how France's wine industry was saved from a devastating plague by the New World.' Daily Mail

'Such are Christy Campbell's superb story-telling skills that, notwithstanding my woeful ignorance of science, botany and viticulture, I found myself utterly hooked on this fascinating piece of social history.' Hugh Massingberd, Daily Telegraph

'As Christy Campbell shows so vividly, the desperate search for both cause and cure involves all the elements of a good thriller... such a good read.' Joanna Simon, Sunday Times

'Phylloxera is a rattling good read; the author handles scientific material with such a nimble touch that at no point was I overcome by the onslaught of entomological detail.' Giles MacDonogh, Literary Review

Christy Campbell was a publisher's editor before turning freelance writer. He has written for the Sunday Telegraph since 1990 when he joined as Defence Correspondent covering the Gulf War. He has made a speciality of 'forensic historical investigations' and produced a series of special supplements for the Sunday Telegraph on 20th-century history. He has written a number of non-fiction books on World War II and broadcast on radio and television, and is the author of The Maharajah's Box published by HarperCollins.

GOR011467930
9780007115365
0007115369
Phylloxera: How Wine was Saved for the World by Christy Campbell
Christy Campbell
Used - Like New
Paperback
HarperCollins Publishers
2004-12-06
368
N/A
Book picture is for illustrative purposes only, actual binding, cover or edition may vary.
The book has been read, but looks new. The book cover has no visible wear, and the dust jacket is included if applicable. No missing or damaged pages, no tears, possible very minimal creasing, no underlining or highlighting of text, and no writing in the margins
Trustpilot