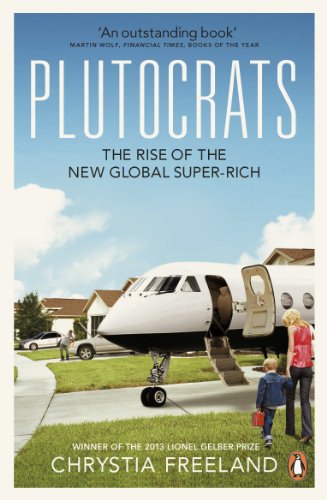 In Stock
£6.49
Forget the 1 per cent - it's time to get to grips with the 0.1 per cent... There has always been some gap between rich and poor, but it has never been wider - and now the rich are getting wealthier at such breakneck speed that the middle classes are being squeezed out. This title deals with this topic.
Good
Only 1 left

Plutocrats: The Rise of the New Global Super-Rich by Chrystia Freeland

There has always been some gap between rich and poor, but it has never been wider - and now the rich are getting wealthier at such breakneck speed that the middle classes are being squeezed out. While the wealthiest 10% of Americans, for example, receive half the nation's income, the real money flows even higher up, in the top 0.1%. As a transglobal class of highly successful professionals, these self-made oligarchs often have more in common with one another than with their own countrymen. But how is this happening, and who are the people making it happen?

Chrystia Freeland, acclaimed business journalist and Global Editor-at-Large of Reuters, has unprecedented access to the richest and most successful people on the planet, from Davos to Dubai, and dissects their lives with intelligence, empathy and objectivity. Pacily written and powerfully researched, Plutocrats could not provide a more timely insight into the current state of Capitalism and its most wealthy players.

'A superb piece of reportage ... a tremendous illumination' (New Statesman on Freeland's previous title, Sale of the Century)

Chrystia Freeland is the managing editor and director of consumer news at Thompson Reuters, following years of service at the Financial Times both in New York and London. She was the deputy editor of Canada's The Globe and Mail and has reported for the Financial Times, The Economist, and The Washington Post. Freeland is also the author of Sale of a Century: The Inside Story of the Second Russian Revolution. She lives in New York City.

GOR008250576
Plutocrats: The Rise of the New Global Super-Rich by Chrystia Freeland
Chrystia Freeland
Used - Good
Paperback
Penguin Books Ltd
2013-10-03
352
0141043423
9780141043425
N/A
Book picture is for illustrative purposes only, actual binding, cover or edition may vary.
The book has been read but remains in clean condition. All pages are intact and the cover is intact. Some minor wear to the spine.