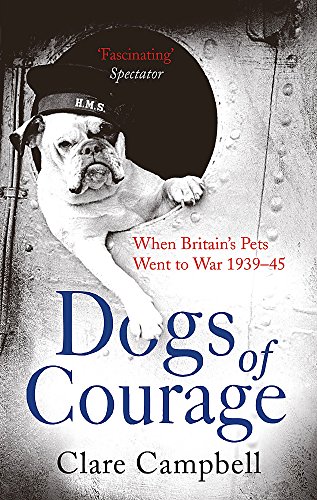 Dogs of Courage by Clare Campbell

What did the nation's dogs do for the war effort? How did man's best friend prove his loyalty in his master's struggle against the Axis threat?

Dogs of Courage: When Britain's Pets Went to War 1939-45 by Clare Campbell

In Bonzo's War, Clare Campbell told the fascinating story of what it was like for Britain's pets when the world was at war. This time, she follows the incredible journey of the dogs who conscripted to fight for their country, with some even returning with medals for their bravery.

During the most dangerous days of the Second World War, the British government set out to recruit an army of canines - a 'Guard Dog Unit'. This experimental team of brave hounds would later use their incredible sense of smell to sniff out the anti-personnel mines that barred the way to reclaiming Europe.

Dog owners countrywide shed tears as they bid farewell to their beloved 'Brian', 'Rex', or 'Molly' and packed them off to the War Dogs Training School to learn the skills they'd need to 'do their bit for Britain' on the very frontiers of the Third Reich.

The soldiers waiting out in the field to greet their canine counterparts were under strict instructions: do not get too attached to your new four-legged companion. That bit proved disastrously impossible.

Based on original documents, first-hand accounts and interviews, Dogs of Courage tells a story of human determination, heartbreak and uncompromising canine courage that has never been told before.

Clare Campbell is an author and journalist. She writes regularly for the Daily Mail and contributes to Marie Claire. She is the author of Out of It (2007) and Tokyo Hostess (2009). Recently she ghosted the national bestseller, Bringing Down the Krays (2012), by Bobby Teale. Her husband and co-author Christy Campbell is the former defence correspondent of the Sunday Telegraph. He is the author of The Maharajah's Box, Fenian Fire, Phylloxera, Band of Brigands and Target London (2012). Together, they are the authors of Bonzo's War: Animals Under Fire 1939-45 (2013).
GOR007948114
9781472115676
1472115678
Dogs of Courage: When Britain's Pets Went to War 1939-45 by Clare Campbell
Clare Campbell
Used - Like New
Paperback
Little, Brown Book Group
2016-02-25
400
N/A
Book picture is for illustrative purposes only, actual binding, cover or edition may vary.
The book has been read, but looks new. The book cover has no visible wear, and the dust jacket is included if applicable. No missing or damaged pages, no tears, possible very minimal creasing, no underlining or highlighting of text, and no writing in the margins
Trustpilot