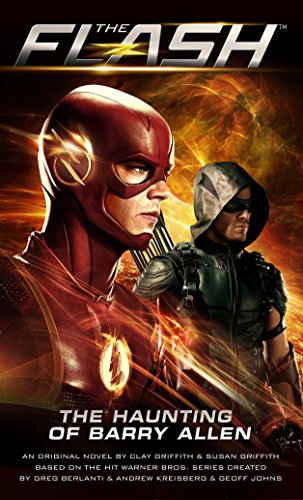 Used Price
£4.99
New RRP £7.99
Free Shipping in the UK
Following the supercharged, crime-fighting superhero with the power to move at superhuman speeds, this first Flash adventure pits the Scarlet Speedster against the villains who comprise his metahuman Rogues Gallery. But when The Flash's own abilities begin to tail him, he must seek help from his closest ally - The Arrow.
Reviews:
Trustpilot
Very Good

Flash: The Haunting of Barry Allen by Clay Griffith

Speeding through Central City, Barry Allen is met with a startling sight-the Flash, older, battered, and badly injured. Before he can speak, the doppelganger is gone.Then Barry begins experiencing glitches in his powers-moments that leave him ghostly and immobile in the middle of missions. When a group of his enemies-including Pied Piper, Weather Wizard, and Peekaboo-chooses this time to launch a new assault, the Flash seeks help from his most trusted ally.Oliver Queen - the Arrow.

"We had a blast reading it too. One of the best things the authors did was isolate two characters in random chapters. In this way they provided extra value not seen on TV." - Superhero Novels

"a great job of keeping the characters true and as believable as if we were watching an episode of The Flash."- SciFiChic

Susan and Clay Griffith are a husband and wife team who have written the original Vampire Empire fantasy series for Pyr Books, as well as the tie-in Crown 8: Key series for Random House. They've written numerous short stories for anthologies, some featuring noted genre characters such as Kolchak the Night Stalker and The Phantom, and have scripted comics including The Tick, The Simpsons, and Vincent Price Presents.

GOR008060844
Flash: The Haunting of Barry Allen by Clay Griffith
Clay Griffith
Used - Very Good
Paperback
Titan Books Ltd
2016-11-29
320
1785651412
9781785651410
N/A
Book picture is for illustrative purposes only, actual binding, cover or edition may vary.
This is a used book - there is no escaping the fact it has been read by someone else and it will show signs of wear and previous use. Overall we expect it to be in very good condition, but if you are not entirely satisfied please get in touch with us.