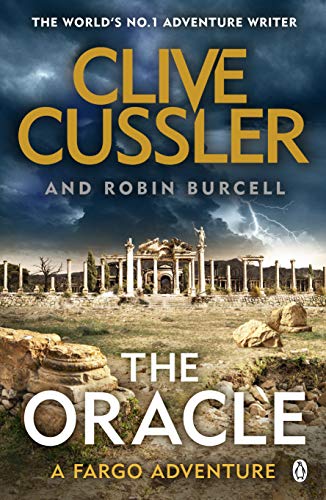 The Oracle
by Clive Cussler

The Oracle: Fargo #11 by Clive Cussler

JOIN THE LATEST ADVENTURE WITH SAM AND REMI FARGO IN THIS THRILLING TREASURE-HUNTING STORY FEATURING A LOST SCROLL FROM BESTSELLING AUTHOR, CLIVE CUSSLER

Husband and wife treasure-hunting team Sam and Remi Fargo ARE BACK in a brand-new thrilling adventure to find an ancient scroll which carries a deadly curse . . .

The last Vandal ruler faces the invading Byzantines.
An oracle predicts defeat unless a sacred scroll is found . . .

When an archaeological dig in Tunisia funded by Sam and Remi Fargo uncovers clues pointing to the whereabouts of a lost ancient scroll, the treasure hunting team can't wait to discover the truth.

But it looks like they'll have to - the Nigerian school they fund has been robbed and they need to find out what happened.

Little do they realise how ruthless this band of robbers are - willing to take Remi and the school's students hostage. With a snake in the grass in the Fargo team, not to mention hints that this might just be connected to their lost scroll, Sam and Remi have their work cut just staying alive.

But when the Fargos know there's treasure waiting to be discovered, nothing will stop them . . .

'Nobody does it better...nobody!' Stephen Coonts

Praise for Clive Cussler * - *
The Adventure King * Sunday Express *
Cussler is hard to beat * Daily Mail *
Nobody does it better... nobody!
Just about the best in the business * New York Post *

GOR010550363
The Oracle: Fargo #11 by Clive Cussler
Clive Cussler
Fargo Adventures
Used - Very Good
Paperback
Penguin Books Ltd
2020-05-14
464
1405941065
9781405941068
N/A
Book picture is for illustrative purposes only, actual binding, cover or edition may vary.
The book has been read, but looks new. The book cover has no visible wear, and the dust jacket is included if applicable. No missing or damaged pages, no tears, possible very minimal creasing, no underlining or highlighting of text, and no writing in the margins.