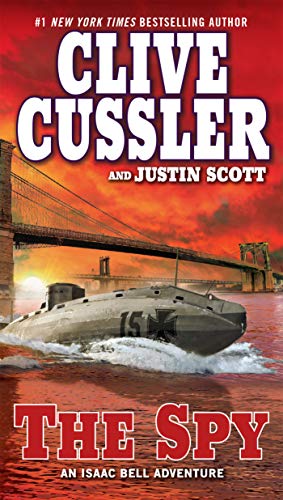 The Spy
by Clive Cussler

Used Price
£3,49
Free Shipping in the UK
In 1908, a brilliant American battleship gun designer dies in an apparent suicide. The man's daughter turns to the Van Dorn Detective Agency to clear her father's name. Van Dorn puts his chief investigator on the case, and Isaac Bell soon realizes that the clues point to murder. Available in a tall Premium Edition.
Reviews:
Trustpilot
Very Good

The Spy by Clive Cussler

Twentieth century detective Isaac Bell takes on the world of warfare when America's naval research and development experts begin to die one by one in this #1 New York Times-bestselling historical action adventure.

1908 marks a year of ever-escalating international tension as the world plunges toward war. And with America on the brink, it comes as a devastating blow to learn of the apparent suicide of one of the United States' most brilliant battleship-gun designers. The death becomes a media sensation, and the man's grief-stricken daughter turns to the legendary Van Dorn Detective Agency to clear her father's name. Van Dorn puts his chief investigator on the case, and Isaac Bell soon sees that the clues point not to suicide, but to murder. As Bell notices more suspicious deaths among the nation's sharpest technological minds, he begins to suspect the work of an elusive spy somehow connected to a top-secret project called Hull 44.

But that is just the beginning. As the intrigue deepens, Bell will find himself pitted against German, Japanese, and British spies, in a mission that encompasses dreadnought battleships, Teddy Roosevelt's Great White Fleet, Chinatown, Hell's Kitchen, and the Brooklyn Navy Yard. Isaac Bell has certainly faced perilous situations before, but this time it is more than the future of his country that's at stake--it's the fate of the world.

Justin Scott is the author of thirty-one novels, including The Shipkiller and Normandie Triangle; the Ben Abbott detective series; six thrillers under his pen name Paul Garrison; and his coauthorship with Cussler of The Wrecker, The Spy, The Race, The Thief, The Striker, The Bootlegger, The Assassin, The Gangster, and The Cutthroat. Scott lives in Connecticut.

GOR002861687
The Spy by Clive Cussler
Clive Cussler
Isaac Bell Adventures
Used - Very Good
Paperback
Penguin Putnam Inc
2011-05-31
528
0425241750
9780425241752
N/A
Book picture is for illustrative purposes only, actual binding, cover or edition may vary.
This is a used book - there is no escaping the fact it has been read by someone else and it will show signs of wear and previous use. Overall we expect it to be in very good condition, but if you are not entirely satisfied please get in touch with us.