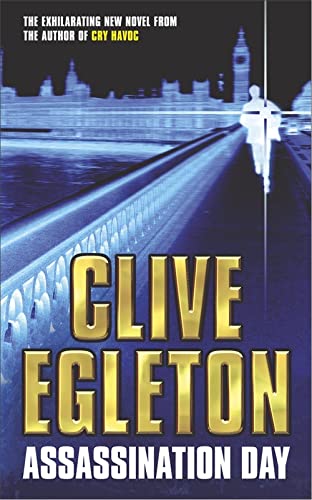 In Stock
£12.99
The exhilarating new spy thriller from the author of Cry Havoc
Very Good Good
Only 2 left

Ross Frazer. Ex-Intelligence. Ex-Assassin. And dead - Or is he?

SIS officer Will Landon assumes he has a simple case ahead of him when asked to investigate the sensational autobiography by the mysterious Ross Frazer.

It gets complicated when two people associated with the book are murdered. With only silence from his superiors and two bogus intelligence officers on his tail, one girl's recollection of the original document is all Landon has to go on. With time running out he needs to start making some connections...and fast

'If anyone can keep the old-fashioned spy novel alive, it's British veteran Egleton . . . Egleton uses his obvious insider knowledge of intelligence antics to keep his story moving along briskly.' Publishers Weekly (Assasination Day)
'A story line that strikes a raw nerve this day and age - dealing with the threat of militant extremists...The story has more twists and turns than an English country lane as Egleton leads you through the shady world of counter espionage...almost impossible to put down and once again has proved him to be one of today's best thriller writers.' Doncaster Free Press (Assassination Day)
As intense and chilling as le Carre, Egleton is one of today's best thriller writers * Booklist (A Killing in Moscow) *
A classic spy novel, one of the best Egleton has written, using two of his strongest skills: authentic detail and relentless probing to reveal treachery buried deep in the past. * Michael Hartland, Daily Telegraph (A Lethal Involv *
Arcane plot twists, exotic settings and bursts of violence, with a dollop of civilized sex...great. * New York Times (Blood Money) *

Clive Egleton brings years of experience in the Intelligence and Counter Espionage fields to his enthralling novels of suspense. Widely regarded as one of Britain's leading thriller writers, he is the author of nearly thirty highly acclaimed novels. He lives in the Isle of Wight.

GOR004685424
Assassination Day by Clive Egleton
Clive Egleton
Used - Very Good
Paperback
Hodder & Stoughton General Division
2004-04-12
384
0340820411
9780340820414
N/A
Book picture is for illustrative purposes only, actual binding, cover or edition may vary.
This is a used book - there is no escaping the fact it has been read by someone else and it will show signs of wear and previous use. Overall we expect it to be in very good condition, but if you are not entirely satisfied please get in touch with us.