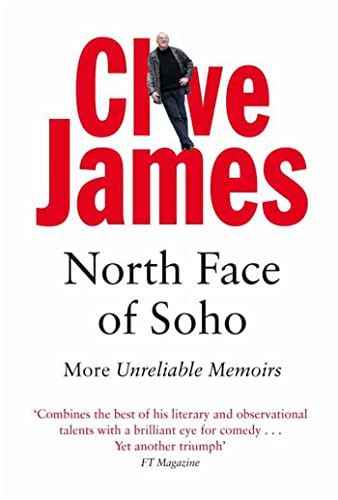 `In the closing pages of the last volume, I got married. The ceremony marked a rare outbreak of normality in my life. It was symbolized by my personal appearance. I was clean-shaven and had a hairstyle in reasonably close touch with my head.'

After Unreliable Memoirs, Falling Towards England and May Week Was In June comes the fourth instalment in Clive James's life. Taking us from Fleet Street to Clive James on TV, from Russian department stores to Paris fashion shows - via fatherhood, some killer bees, and a satire starring Anne Robinson as Mrs Thatcher - North Face of Soho is the larger-than-life story of a life lived to the full.

`It's not just that he writes a lot, but that he writes with intense perfectionism, and delivers his gags with honed elegance' Sunday Times
`I feel I know more about the author after reading it than I gleaned from all of his other books put together. This is a book about hard-earned self-knowledge. What makes it funny is quite how hard the self-knowledge was to earn' William Leith, Evening Standard

Clive James is the author of more than forty books. As well as his memoirs, he has published essays, collections of literary and television criticism, travel writing, verse and novels. As a television performer he has appeared regularly for both the BBC and ITV, most notably as writer and presenter of the Postcard series of travel documentaries. In 1992 he was made a Member of the Order of Australia and in 2003 he was awarded the Philip Hodgins memorial medal for literature.

Besides his popular biographies, his work includes Cultural Amnesia, Poetry Notebook and his own translation of Dante's The Divine Comedy.

GOR010304485
North Face of Soho by Clive James
Clive James
Unreliable Memoirs
Used - Like New
Paperback
Pan Macmillan
2007-07-01
272
0330481274
9780330481274
N/A
Book picture is for illustrative purposes only, actual binding, cover or edition may vary.
The book has been read, but looks new. The book cover has no visible wear, and the dust jacket is included if applicable. No missing or damaged pages, no tears, possible very minimal creasing, no underlining or highlighting of text, and no writing in the margins.