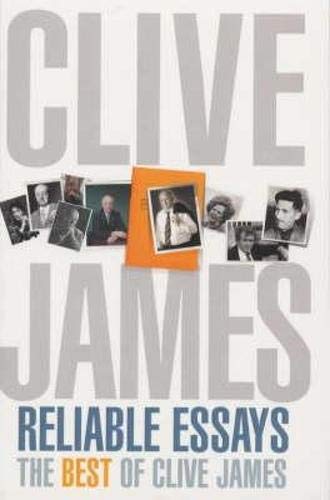 Including his most memorable pieces - his `Postcard from Rome', his observations on Margaret Thatcher, his insights into Heaney, Larkin and Orwell - this book also contains brilliantly funny examinations of characters like Barry Humphries, as well as showcasing James's more thoughtful, analytical side.

From Germaine Greer to Marilyn Monroe, from the nature of celebrity to German culpability for the Holocaust, Reliable Essays is an unmissable collection from one of the best writers of our time.

`He has widened the "tonal range" of criticism, permitting it to be both sober and skittish, learned and lewd, rhetorically rambunctious and epigrammatically concise . . . an intellectual as well as a joker, a wise man as well as a wit' Peter Conrad, Observer

`His writing is impeccably witty, flexible and urbane . . . immensely enjoyable to read. It's a pleasure to see the metropolitan critic back in action' Christopher Taylor, Sunday Telegraph

`He can both get to the heart of a subject and raise a laugh' Nicholas Lezard, Sunday Times

Clive James is the author of more than forty books. As well as essays, he has published collections of literary and television criticism, travel writing, verse and novels, plus five volumes of autobiography, Unreliable Memoirs, Falling Towards England, May Week Was In June, North Face of Soho and The Blaze of Obscurity. As a television performer he appeared regularly for both the BBC and ITV, most notably as writer and presenter of the Postcard series of travel documentaries. His popular Radio 4 series A Point of View has been published in volume form. He has also published several poetry collections, a verse commentary of Proust, Gate of Lilacs, and a translation of Dante's The Divine Comedy. In 1992 he was made a Member of the Order of Australia and in 2003 he was awarded the Philip Hodgins memorial medal for literature. He holds honorary doctorates from Sydney University and the University of East Anglia. In 2012 he was appointed CBE and in 2013 an Officer of the Order of Australia.

GOR001213681
Reliable Essays: The Best of Clive James by Clive James
Clive James
Used - Very Good
Paperback
Pan Macmillan
2002-06-07
672
0330481304
9780330481304
N/A
Book picture is for illustrative purposes only, actual binding, cover or edition may vary.
This is a used book - there is no escaping the fact it has been read by someone else and it will show signs of wear and previous use. Overall we expect it to be in very good condition, but if you are not entirely satisfied please get in touch with us.