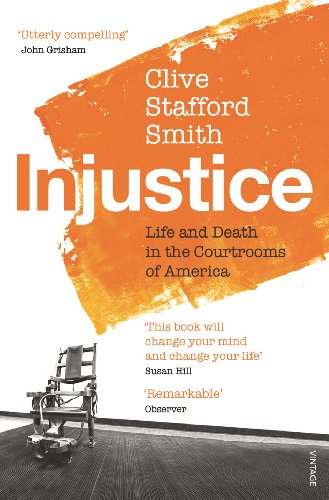 In Stock
£5.49
So far, so good - except that, as Stafford Smith argues here so compellingly, the American justice system is actually designed to ignore innocence. Step by step, Stafford Smith untangles the Maharaj case and the system that makes disasters like this inevitable.
Very Good
5 in stock

Injustice: Life and Death in the Courtrooms of America by Clive Stafford Smith

Shortlisted for the 2013 Orwell Prize. THE STORY CONTINUES: TWO NEW CHAPTERS FOR THE PAPERBACK EDITION In 1986, Kris Maharaj, a British businessman living in Miami, was arrested for the brutal murder of two ex-business associates. His lawyer did not present a strong alibi; Kris was found guilty and sentenced to death in the electric chair. It wasn't until a young lawyer working for nothing, Clive Stafford Smith, took on his case that strong evidence began to emerge that the state of Florida had got the wrong man on Death Row. So far, so good - except that, as Stafford Smith argues here so compellingly, the American justice system is actually designed to ignore innocence. Twenty-six years later, Maharaj is still in jail. Step by step, Stafford Smith untangles the Maharaj case and the system that makes disasters like this inevitable. His conclusions will act as a wake-up call for those who condone legislation which threatens basic human rights and, at the same time, the personal story he tells demonstrates that determination can challenge the institutions that surreptitiously threaten our freedom.

"True stories of wrongful convictions are by their nature utterly compelling. In Injustice, Clive Stafford Smith details a spectacular example of a bogus conviction, and the many lives ruined by it...A superbly written account of only one case, but one of thousands." -- John Grisham
"Clive Stafford Smith is an extraordinary lawyer, but he is also a great storyteller and his account of the Kris Maharaj death row case is a powerful thriller, beautifully told." -- Helena Kennedy Q.C.
"Stafford Smith is a true hero and this book helps explain why." -- Jon Ronson
"If you believe in the death penalty, read this book. It will change your mind and change your life. A book that zaps through you at 2,000 volts - just like the current used to execute a man in the electric chair." -- Susan Hill
"An empowering read for anyone who cares about the humane implementation of justice - no matter where it is." -- Colin Firth

Clive Stafford Smith is a lawyer specialising in defending those accused of the most serious crimes, and is founder and Director of UK legal charity Reprieve. Based in the US for twenty-six years, he now works from the UK where he continues to defend prisoners on Death Row, and challenges the continued incarceration of those held in secret prisons around the world. He has secured the release of 65 prisoners from Guantanamo Bay and still acts for fifteen more. His book Bad Men (shortlisted for the 2008 Orwell Prize) described this campaign. Alongside many other awards, in 2000 he received an OBE for 'humanitarian services'.

GOR004989257
Injustice: Life and Death in the Courtrooms of America by Clive Stafford Smith
Clive Stafford Smith
Used - Very Good
Paperback
Vintage Publishing
2013-07-15
432
0099572192
9780099572190
Short-listed for Orwell Prize 2013 (UK) Short-listed for CWA Non-Fiction Dagger 2013 (UK)
Book picture is for illustrative purposes only, actual binding, cover or edition may vary.
This is a used book - there is no escaping the fact it has been read by someone else and it will show signs of wear and previous use. Overall we expect it to be in very good condition, but if you are not entirely satisfied please get in touch with us.