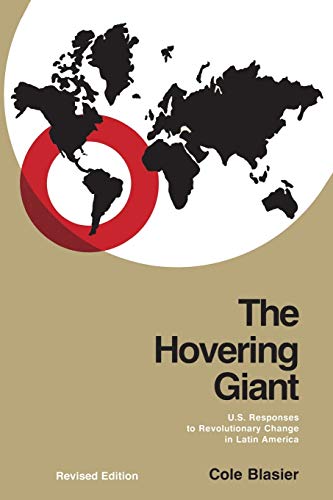 In Stock
£28.99
In this revised edition of The Hovering Giant Cole Blasier updates his comprehensive study of revolutionary change in Latin America. The book now includes a discussion about the revolt in El Salvador and U.S.-Cuban relations in addition to earlier revolutions in Mexico, Chile, and Guatemala.
Very Good
Only 1 left

In the first edition of The Hovering Giant, Cole Blasier analyzed U.S. response to revolutions in Latin America from Madero in Mexico to Allende in Chile. He explained why U.S. leaders sponsored paramilitary units to overthrow revolutionary governments in Guatemala and Cuba and compromised their own differences with revolutionary governments in Mexico and Bolivia. The protection of private U.S. interests was part of the explanation, but Blasier gave greater emphasis to rivalry with Germany or the Soviet Union.

Now in this revised edition, Blasier also examines the responses of the Carter and Reagan administrations to the Grenadian and Nicaraguan revolutions and the revolt in El Salvador. He also brings up to date the interpretation of U.S.-Cuban relations.

Blasier stresses U.S. defense of its preeminent position in the Caribean Basin, as well as rivalry with the Soviet Union, to explain these later U.S. responses. Seemingly unaware of historical experience, Washington followed patterns in Central America and Grenada similar to earlier patterns in Guatemala, Cuba, and Chile even though the latter had adverse effects on U.S. security and economic interests.

"Honest, well-argued study which presents the complexities of U.S. responses to revolutions with a high degree of skill and fairness."
--American Historical Review|"The book is well related to the literature on international and hemispheric relations and the case studies are used to develop broader insights. It is a book that is to be recommended for its capacity to link domestic and international politics, for its insights into how foreign policy decisions get made, and for its analysis of how policy change occurs."
--Latin American Research Review|"Drawing upon his university experiences in Latin America and his foreign service background in Europe and Washington, [Blasier] has produced a volume both timely and provocative --immensely useful to students of inter-American relations and worthy of intensive study by Washington policy makers."
--World Affairs

Cole Blasier, Professor of Political Science at the University of Pittsburgh, is author of The Giant's Rival: The USSR and Latin America. Blasier studied or taught at Universities in Chile, Colombia, and Mexico and served as a career foreign service officer in Belgrade, Bonn, Moscow, and Washington. Because of long first-hand experience in official Washington and Moscow and extensive residence in Latin America, Blasier is uniquely qualified to appraise this complex arena of conflict.

GOR009949058
The Hovering Giant (Revised Edition): U.S. Responses to Revolutionary Change in Latin America, 1910 1985 by Cole Blasier
Cole Blasier
Pitt Latin American Series
Used - Very Good
Paperback
University of Pittsburgh Press
1985-12-31
384
0822953722
9780822953722
N/A
Book picture is for illustrative purposes only, actual binding, cover or edition may vary.
This is a used book - there is no escaping the fact it has been read by someone else and it will show signs of wear and previous use. Overall we expect it to be in very good condition, but if you are not entirely satisfied please get in touch with us.