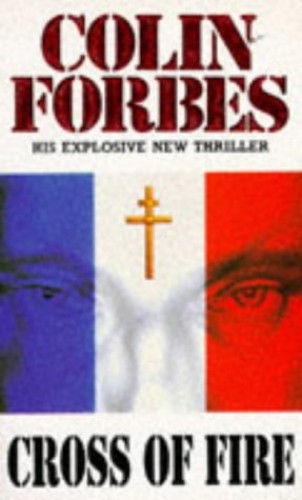 Cross of Fire by Colin Forbes

In his most explosive novel to date, Forbes predicts what will erupt in Europe tomorrow...

Cross of Fire by Colin Forbes

Tweed grasps the new signals catastrophe in Europe -- on Britiain's doorstep. Can he identify the mastermind behind this conspiracy in time?

Is there a link between two identical murders -- one in Aldeburgh, Suffolk, the second in Bordeaux, France? What roles are played by Jean Burgoyne, English mistress of General Charles de Forge -- a new de Gaulle? By Isabelle Thomas, girlfriend of a murdered British agent? By Captain Victor Rosewater, British Army officer?

Savage riots break out in France, the mob brandishes blazing Crosses of Loarraine. The action races from Britain to Switzerland, Germany and France. Paula Grey and Bob Newman are caught in the inferno.

Assassination is the spark exploding crisis into disaster. In his most dynamic novel to date, Forbes predicts what will erupt in Europe tomorrow.

GOR002868299
9780330322416
0330322419
Cross of Fire by Colin Forbes
Colin Forbes
Used - Very Good
Paperback
Pan Macmillan
1993-01-01
560
N/A
Book picture is for illustrative purposes only, actual binding, cover or edition may vary.
This is a used book - there is no escaping the fact it has been read by someone else and it will show signs of wear and previous use. Overall we expect it to be in very good condition, but if you are not entirely satisfied please get in touch with us
Trustpilot