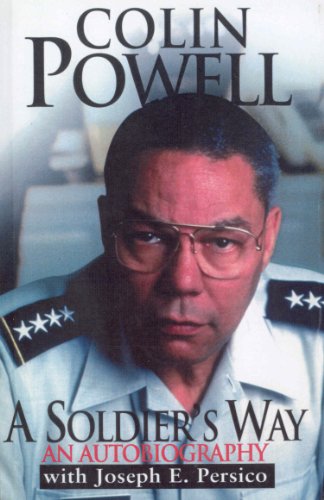 A Soldier's Way
by Colin Powell

In Stock
£4.99
The rest is history - Vietnam, the Pentagon, Panama, Desert Storm - but a history that until now has been known only on the surface.
Very Good
Only 1 left

A Soldier's Way: An Autobiography by Colin Powell

The Number One International Bestseller. Colin Powell is the embodiment of the American dream. He was born in Harlem to immigrant parents from Jamaica. He knew the rough life of the streets. He overcame a barely average start at school. Then he joined the Army. The rest is history - Vietnam, the Pentagon, Panama, Desert Storm - but a history that until now has been known only on the surface. A Soldier's Way is the powerful story of a life well lived and well told. At a time when Americans feel disenchanted with their leaders, Powell's passionate views on family, personal responsibility, and, in his own words, 'the greatness of America and the opportunities it offers' inspire hope and present a blueprint for the future. An utterly absorbing account, it is history with a vision

"A great American success story . . . An endearing and well-written book" * New York Times *
"Profound and moving . . . must reading for anyone who wants to reaffirm his faith in the promise of America." * Wall Street Journal *

Colin Powell was born in New York City. He was a professional soldier for 35 years, during which time he won numerous US and foreign military decorations and rose to the rank of Four-star General. In December 2000, he was nominated by President Bush as Secretary of State, the first African-American to hold such high office. Joseph E. Persico is the author of biographies on Nelson Rockefeller and former CIA chief William J. Casey. His work Nuremberg: Infamy on Trial was hailed by Howard K. Smith as the 'best account' of the trial.

GOR001415692
A Soldier's Way: An Autobiography by Colin Powell
Colin Powell
Used - Very Good
Paperback
Cornerstone
2001-11-01
656
009943993X
9780099439936
N/A
Book picture is for illustrative purposes only, actual binding, cover or edition may vary.
This is a used book - there is no escaping the fact it has been read by someone else and it will show signs of wear and previous use. Overall we expect it to be in very good condition, but if you are not entirely satisfied please get in touch with us.