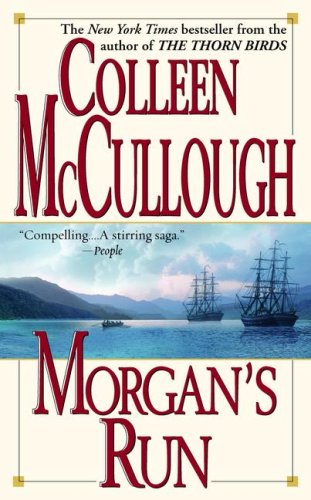 In Stock
£3.59
Following the disappearance of his only son and the death of his beloved wife, Richard Morgan is wrongly convicted of a crime and exiled to England's 18th-century penal colony in Australia. Morgan refuses to surrender to his fate, and begins a soul-trying test to survive in this hostile new land where, against all odds, he would find a new love and a new life.
Very Good Good Well Read
Only 1 left

Colleen McCullough captivated millions with her beloved worldwide bestseller The Thorn Birds. Now she takes readers to the birth of modern Australia with a breath-taking saga brimming with drama, history, and passion.
It was one of the greatest human experiments ever undertaken: to populate an unknown continent with the criminals of English society. For Richard Morgan, twelve months as a prisoner on the high seas would be just the beginning in a soul-trying test to survive in a hostile new land where, against all odds, he would find a new love and a new life. From the dank cells of England's prisons to the unforgiving frontier of the eighteenth-century outback, Morgan's Run is the epic tale of one man whose strength and character helped settle a country and define its future.

Colleen McCullough, a native of Australia, established the department of neurophysiology at the Royal North Shore Hospital in Sydney before working as a researcher at Yale Medical School for ten years. She is the bestselling author of numerous novels, including The Thorn Birds, and lives with her husband on Norfolk Island in the South Pacific.

GOR002627417
Morgan's Run by Colleen McCullough
Colleen McCullough
Used - Very Good
Paperback
Unknown
0
0671024183
9780671024185
N/A
Book picture is for illustrative purposes only, actual binding, cover or edition may vary.
This is a used book - there is no escaping the fact it has been read by someone else and it will show signs of wear and previous use. Overall we expect it to be in very good condition, but if you are not entirely satisfied please get in touch with us.